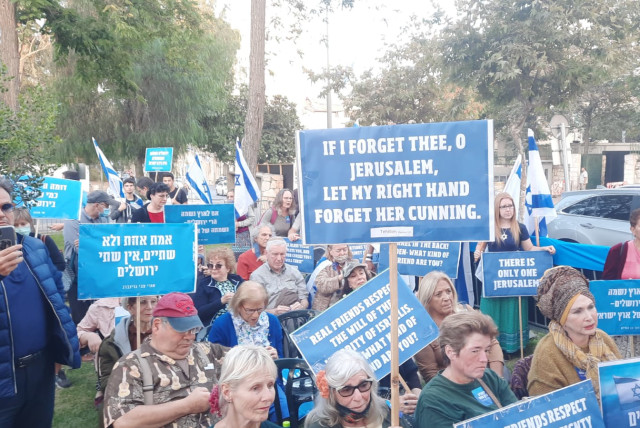 An estimated 100 Israeli’s gathered in support of the country on Agron Street in downtown Jerusalem on Wednesday, opposite the old U.S. consulate building, protesting the Biden administration’s plan to reopen it as a full diplomatic mission for the Palestinian Authority within Israel’s capital.

Unhappy with the Biden administration’s announced plans to open the consulate for Palestinians in Jerusalem, the protest that was organized by Israel’s “Sovereignty Movement” emphasized on the fact that the establishment of a P.A. consulate in Jerusalem would amount to a de facto partition of the city and transform it into a Palestinian capital.

He added: “This is not in the interest of Israel, of the Jewish people or the millions of people around the world who love Israel. Jerusalem needs to remain united. Reopening the Consulate General means abandoning Jerusalem. We cannot let that happen, and the power to say ‘no’ is with [Prime Minister] Naftali Bennett, his coalition and the government of Israel.”

As it stands, in May, during a meeting with P.A. leader Mahmoud Abbas in Ramallah, U.S. Secretary of State Antony Blinken promised that America would reopen the consulate, making good on an earlier campaign pledge by U.S. President Joe Biden.