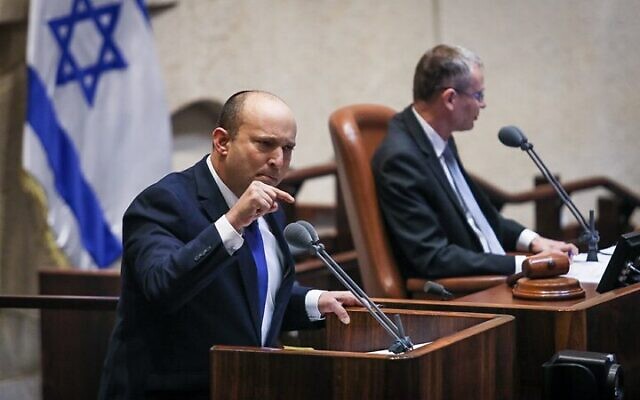 Amidst an overall sentiment of disagreement with the incoming coalition government, on Sunday, before Naftali Bennett was successful in gaining a vote of confidence in the Knesset, he managed to state that he would continue to represent the Charedim.

Thanking outgoing Prime Minister Benjamin Netanyahu for his service, and congratulating the newly elected President Issac Herzog, Bennett went on to speak about Israel, and the current problems it is facing.

Source: The Times of Israel
Photos By : Haim Zach / GPO

He also charted out a list of things that the new government will focus on immediately, saying, “We will enable much ultra-Orthodox youth to go out to work by lowering the (national service) exemption age from 24 to 21. Not by force, but by positive encouragement, allowing young people who want to learn a vocation to be able to, and those who want to study Torah will continue to do so.”

He added that “We will open up competition in Kashrut (kosher certification), and set standards for the system. This will lighten the burden on restaurant owners, ending the stranglehold monopoly in this area, bringing down the cost of food, and strengthening the public’s faith in the level of Kashrut.”

After announcing more such moves, he turned to the orthodox community. “Although the ultra-Orthodox parties chose not to join the coalition, that does not mean you are not represented – I will represent you, we will represent you. The new government will respect the study of the Torah, the Torah which kept us safe for so many years in exile, and at the same time will work to remove the barriers which prevent the ultra-Orthodox community’s integration into the employment market, and Israeli society. Instead of perpetuating the same methods, we will have the opportunity to address the deep problems which burden ultra-Orthodox society: key amongst them the housing crisis. The pace of construction of apartments, neighborhoods, and cities simply does not keep up with natural growth, and there is room for the establishment of new ultra-Orthodox neighborhoods and even a new city in Israel.”

He also added that a State Commission of Inquiry will be set up to probe the Meron disaster.