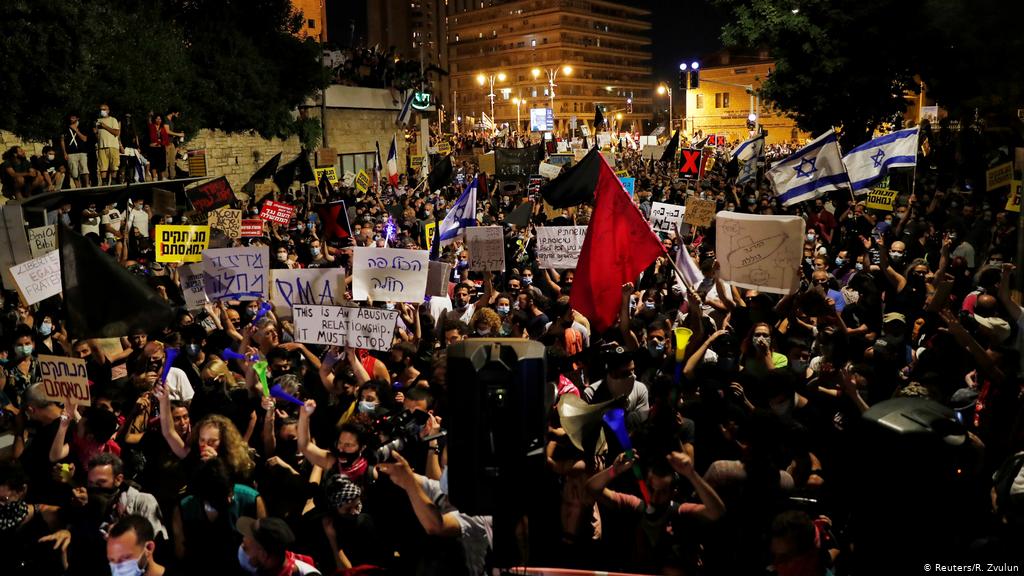 Demanding Prime Minister Benjamin Netanyahu to step down by staging protests as vociferous as the ones before the lockdown, anti-government demonstrators in Israel continue to defy all lockdown norms, with a motive to hold Netanyahu accountable for alleged cases of corruption and malpractice.

Over the weekend, Israel’s protesters reached the 15th week of demonstrations demanding Netanyahu to resign for his handling of the coronavirus crisis, as well as allegations of corruption, which he has denied during several occasions.

Netanyahu is on trial for bribery, fraud, and breach of trust, and is safeguarded by the Israeli law, which does not force a prime minister to step down after being indicted. These events have led to widespread outrage in the nation, leading to gargantuan protests at a time when the country also grappled with the pandemic.

According to a new law that was passed an imposed on Thursday last week, Israelis have been banned from holding demonstrations more than half a mile from their homes, along with numerous other strict social distancing guidelines. Claiming this law to be an escape for those in power, protesters have deemed it to be an attack on their freedom of speech and expression.

In response to the build-up of these protests, Israel’s tourism minister Asaf Zamir resigned from the post, saying he does not have any trust left in Prime Minister Benjamin Netanyahu, accusing him of putting his personal and legal issues ahead of the response to the COVID-19 crisis.“I can no longer sit in a government in which I don’t have an ounce of trust in the person at its head,” Zamir tweeted. “I have unfortunately determined that the coronavirus crisis and its terrible impact is at best in second place in the list of priorities of the prime minister. Personal and legal considerations are at the top of Netanyahu’s priorities,” he said.

Ignoring the new law and charging with the same force and vigor, an estimated 100,000 people rallied in squares and at junctions throughout the country from sunset on Saturday, throughout the remainder of the weekend.

According to numerous local news reports, more than 30 people were arrested in Tel Aviv by police for defying the lockdown norms and laws. As of Sunday, Israel has recorded more than 264,000 infections, out of which more than 191,000 have recovered, while the death toll has hit almost 1,700 out of a population of nine million.