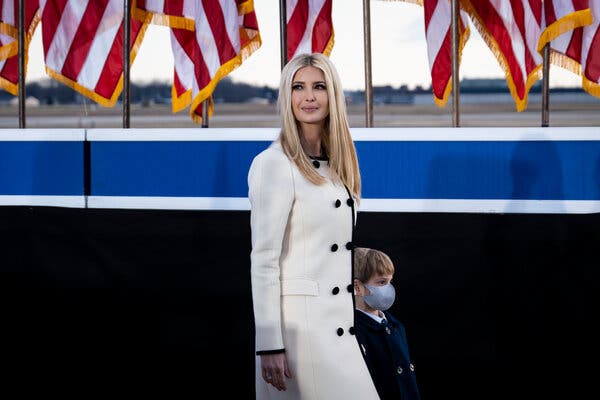 Ivanka Trump Will Not Be Running For Florida’s Senate Race in 2022: Source

Earlier on, speculations regarding former President Donald Trump’s daughter aiming at a possible Senate seat from Florida had started making its rounds. According to recent reports, a source has claimed that Ivanka will not run for the U.S. Senate in 2022 when Florida’s Marco Rubio is up for election.

On Thursday, The New York Times quoted a spokesman for Rubio, the incumbent Republican senator, as saying that Trump relayed his daughter’s intention not to run to the senator last month. “Marco did speak with Ivanka a few weeks ago,” Nick Iacovella, a Rubio spokesman, said. “Ivanka offered her support for Marco’s reelection. They had a great talk.”

The Times confirmed the report with sources close to Ivanka Trump, who said she was never seriously considering a run. Rubio and Donald Trump were sharply at odds during the 2016 election, when both were seeking the nomination, but have since formed a working partnership.

In a statement, Ivanka Trump said Rubio “is a tremendous advocate for working families” and “a good personal friend.” “I have seen Marco’s commitment to fighting for American families through our work together to double the child tax credit, get millions more Americans access to paid family leave and creating the paycheck protection program to support small business during the pandemic,” Ivanka Trump said.

Just a few weeks back, there was talk that Ivanka, Former President Donald Trump’s Jewish daughter, would run against Rubio in the primaries. Ivanka Trump served as a senior unpaid adviser to her father, as did her husband, Jared Kushner.

The rumors had sprouted ever since the Kushner couple moved to Florida after Mr. Trump left office. It is also being claimed that Eric Trump’s wife, Lara, is more serious about a Senate candidacy in North Carolina, where the incumbent Republican, Richard Burr, has said he will not run in 2022. Sen. Lindsey Graham, R-S.C., has already vocalized his support for the wife of Eric Trump if she were to run for the seat that will be vacated when Sen. Richard Burr leaves office. Burr received condemnation for his vote to convict Donald Trump of incitement of the Jan. 6 riot at the Capitol.

Meanwhile, in a statement on Thursday, Rubio said he is “incredibly grateful to Ivanka for her friendship and support.”