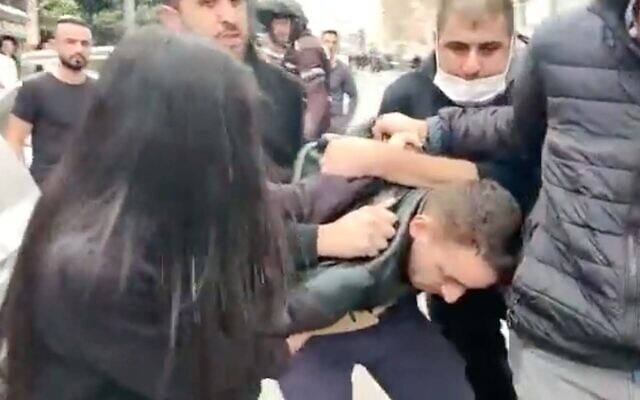 Jerusalem Police in Hot Water For Beating Up Ultra-Orthodox Man

Earlier this week, police in Jerusalem were filmed beating up a Charedi man during a Wednesday protest against a store selling non-kosher cell phones.

Reportedly an innocent bystander, a Charedi man who was singled out by police officers and beaten up, and another was seen being blasted by water cannons. Identified as Haim Mizrachi, he was seen in security footage trying to get the attention of police detectives in a civilian vehicle who was driving against traffic and had bumped into another car. He apparently did not realize the men were police officers.

After this, the footage shows Mizrachi calmly speaking to other people on the street, then approaching and speaking to the officers in the car before walking away. An officer then chased him, dragged him against a car, and started beating him. Other officers joined in, and whilst this was going on, at no point was Mizrachi seen behaving violently or acting out in protest. Soon after this, the officers took him to a police station in Jerusalem’s Russian Compound.

Speaking to local media outlets, Mizrachi said, “I said I’ll go tell him that he scratched a car. He told me, ‘Okay, okay,’ like ‘I’m coming over.’ Suddenly they jumped on me, choked me, started punching me. They put me in a police car, stepped on me and punched me in the face. I told them I couldn’t breathe. He told me, ‘You’re getting enough breath,’ and hit me.”

On the other hand, police claimed Mizrachi had assaulted an officer.

In another video released shortly after the first one, police water cannons were seen blasting an ultra-Orthodox man to the ground on a city street.