Jewish Businessman Kicked Out of Southwest Airlines For Eating A Candy

In another atrocious incident of members of the Jewish community getting kicked out of a flight for no solid reason, Mr. Avi Mandel, a 35-year-old business owner living with his wife and five children in Baltimore, MD, who was flying solo to Miami, was ushered out of his flight. His crime? Eating a twizzler.

Mandel, who was on a Sunday flight with Southwest Airlines from BWI to Miami, was thrown out of the plane for relaxing just a bit since he had had a strenuous day. Remembering the fact that he hadn’t eaten all day, Mandel carefully took his mask down to his chin and opened up a box of Twizzlers to temporarily satiate his hunger. As this happened, a Southwest Airlines stewardess appeared and told Mr. Mandel to put his mask on to which he replied he was eating. The stewardess continued by demanding he lift the mask over his mouth and nose in between bites.

Accustomed to flying multiple times monthly during the pandemic, Mandel mentioned he had never heard about this rule before. As he went on to eat again, an announcement was sounded, saying those on board must list their mask up in between bites. Abiding by the rules and avoiding a stir, Mandel lifted up his mask and spent the next ten minutes reading as the flight proceeded along the taxiway waiting to take off.

About 15 minutes after he finished eating, and was fully masked, there was an announcement that the flight was being brought back to the gate. Out of nowhere, the stewardess approached Mr. Mandel, relaying the news: due to non-compliance he must immediately depart the airplane. 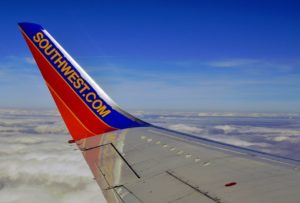 Awestruck by the announcement, fellow passengers also defended Mandel, saying, “This is so wrong!” and “I was here the whole time, he did not do anything wrong!” Keeping his calm as always, Mandel calmly said he would like to understand what exactly he did wrong, to which he was again called out for the mask in between bites fiasco.

The stewardess then called airport police to physically escort Mandel off the flight, to which he complied calmly out of respect for the others on board who needed to get to their destinations.

Not one to point fingers or escalate a situation Mandel noted and reassured, this was not an anti-semitic thing, merely an extreme example of what happens when people get drunk on power and abuse it, but as is being widely seen across media outlets over the past few months, Jewish passengers are being singularly targetted during flights.