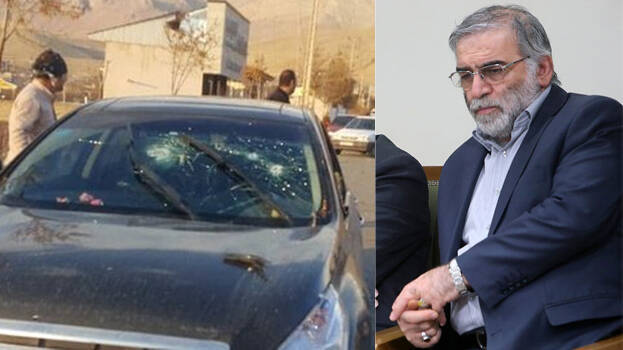 Several top Iranian officials have blamed Israel for the death of Mohsen Fakhrizadeh, the alleged mastermind of Iran’s rogue nuclear weapons program and top nuclear physicist, who was killed in a targeted bombing and shooting attack on Friday, while he was in his car. Iranian officials, as well as Supreme Leader Khamenei, have vowed to avenge his death with an attack in retaliation to the suspected killing.

Furthermore, Israeli security officials are concerned Iran could attack Israeli tourists visiting the United Arab Emirates in retaliation for the assassination which Tehran blames on Israel, according to a television report on Sunday.

Although Mossad’s involvement has not been proved, Iran has pointed fingers at Israel, and The New York Times has also reported that Israel was behind the attack, citing three unnamed intelligence officials. As reported by several media portals, Israel has long been suspected of carrying out a series of targeted killings of Iranian nuclear scientists nearly a decade ago, in a bid to curtail Iran’s nuclear program.

Iranian President Hassan Rouhani accused Israel of being behind the killing of the top nuclear scientist, saying, “Once again, the evil hands of global arrogance were stained with the blood of the mercenary usurper Zionist regime. The assassination of martyr Fakhrizadeh shows our enemies’ despair and the depth of their hatred… His martyrdom will not slow down our achievements.”

On Saturday, in his address to the Islamic state, Khamenei said Iranian authorities must seriously consider and follow up on two issues, “First is following up on this crime and decisively punishing its perpetrators, and the other, following up on the scientific and technical endeavors of the martyr in all the sectors he was working.” Khamenei called Fakhrizadeh a “prestigious nuclear and defense scientist” and said he was “martyred by the hands of criminal and cruel mercenaries.”

Meanwhile, Hossein Dehghan, an adviser to Khamenei alleged the involvement of President Donald Trump in the matter, tweeting, “In the last days of their gambling ally’s political life, the Zionists seek to intensify and increase pressure on Iran to wage a full-blown war. We will descend like lightning on the killers of this oppressed martyr and we will make them regret their actions!”

Over the weekend, Iran also saw protests against Israel and the US, with demonstrators burning Israeli and American flags, as well as photos of US President Donald Trump and President-elect Joe Biden.