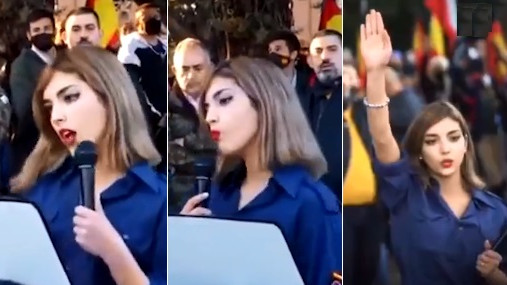 Jewish students from the Federation of Jewish Youth in Spain (FEJJE), backed by the European Union of Jewish Students (EUJS) demanded the Madrid University for the expulsion of Isabel Medina Peralta, who recently led a rally where 300 neo-Nazis marched as a tribute to the Blue Division — Spanish volunteers who fought alongside the Nazis in World War II.

Holding Peralta accountable for a viciously antisemitic speech at a rally earlier this month the group of Jewish students urged the Universidad Complutense de Madrid to expel the activist, for her speech on February 13th. During the rally, which was studded with anti-semitic slogans and remarks, Peralta made despicable remarks, claiming that “the enemy will always be the same, although with different masks: the Jew!” She also said that “nothing could be truer than this statement: the Jew is the guilty one, the Jew is the guilty one and the Blue Division fought against it,” while claiming “Communism is a Jewish invention designed to set workers in confrontation against each other.”

In line with antisemitic sentiments spreading across the globe, the group of 300 people attended the event held near a cemetery in the Spanish capital where veterans who fought alongside Hitler’s troops are buried. Claimed to have been a hotbed for numerous antisemitic speeches and slogans, among several disgraceful comments and addresses, Peralta’s vicious attacks stood out, leading to the Federation of Jewish Communities of Spain calling on prosecutors to launch an investigation into incitement to violence and discrimination against some of the people who attended the event.

Deeply troubled at the antisemite incitement as well as the very nature of the far-right rally, the Jewish students penned a letter to the University Dean, headed by Carlos Goyache, who claimed that the Jewish students at the institution were “outraged and horrified by the virulently antisemitic acts that took place in Madrid.”

“We, young people, students, Jews, Spaniards and Europeans, fight every day for universities to be safe and inclusive, free of hate, discrimination and antisemitism,” the letter stated. “That is why we call on the Universidad Complutense de Madrid to immediately expel Isabel Medina from its student body.”

The letter also supported the earlier call of Spain’s Jewish community for the organizers of the rally to be prosecuted under laws proscribing hate speech.