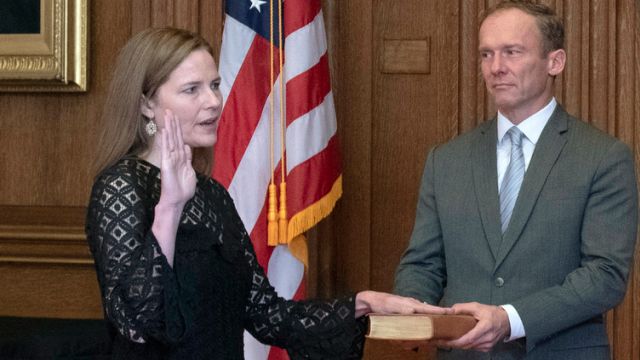 After a comparatively short-spanned battle following the death of legendary Justice Ruth Bader Ginsburg, the conservative SCOTUS candidate Amy Coney Barrett has now become the official pick to preside in the highest court of the nation. The 48-year-old law professor at Notre Dame and a former federal appeals court judge will move the high court to a 6-3 conservative majority.

Following a private ceremony in the Supreme Court’s East Conference Room on Tuesday morning, which was officiated by Chief Justice John Roberts, the now Justice Barrett will be able to join her fellow justices in hearing cases. On Monday, Justice Clarence Thomas administered the constitutional oath to Barrett, who was confirmed by a 52-48 Senate vote, during an outdoor ceremony at the White House.

“Upon administration of that oath, she will be able to begin to participate in the work of the Court…a formal investiture ceremony will take place at a special sitting of the Court in the Courtroom at a later date.” the Supreme Court said in a statement.

Barrett will now accompany a panel of eight justices to rule on various cases of national importance. On a priority basis, the Republicans have requested that the Supreme Court speedily decide a case involving changes to Pennsylvania’s election laws, after the court previously left in place a lower court decision that extended the deadline for ballots to be received for November’s election.

But the most crucial decision that both the Democrats and the Republicans await is scheduled one week after the November 3rd elections, wherein the Supreme Court will decide the fate of the Affordable Care Act, also known as ObamaCare. Throughout the process of Amy Coney Barrett’s confirmation, Democrats have alleged that President Trump was deliberately pushing towards a speedier conservative nomination, so as to rule against the ACA.