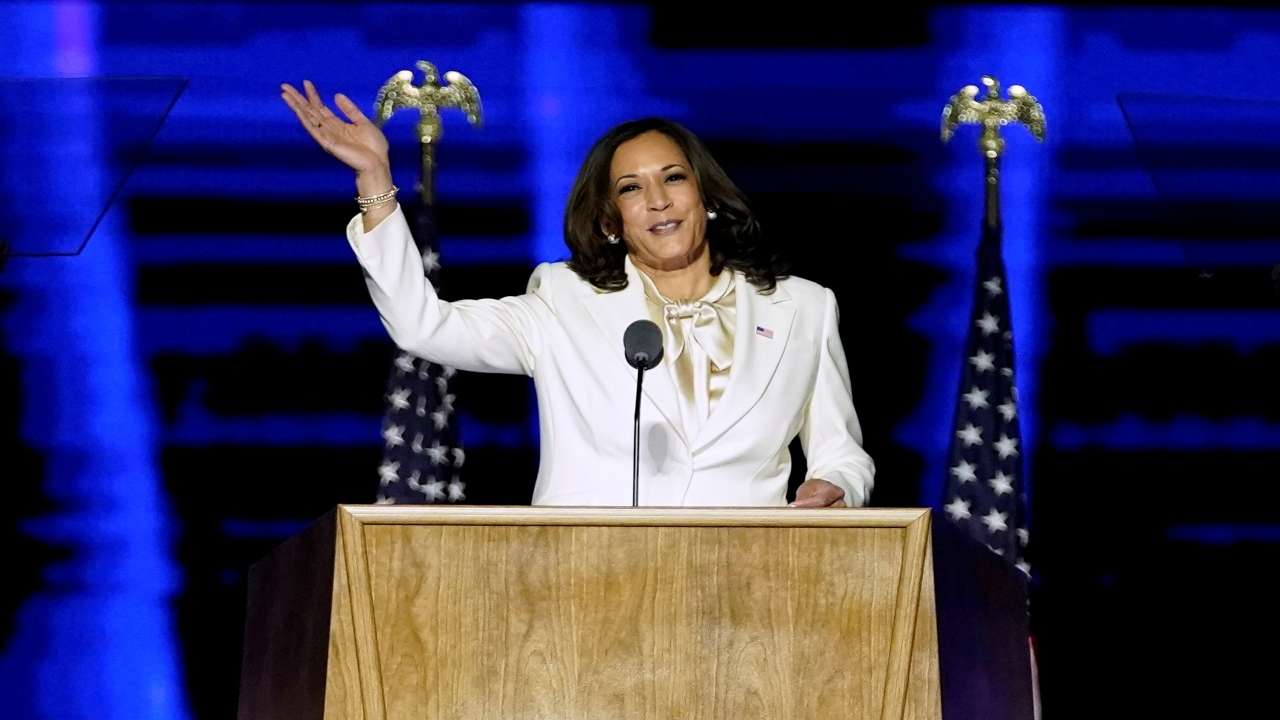 Taking the stage at Wilmington, Delaware on Saturday, alongside President-elect Joe Biden, Kamala Harris, the first Black woman to be elected as the Vice President of the United States delivered a poignant victory speech that centered around African Americans and women.

The first woman, black person, and Asian-American to be elected vice president, Harris, 56, who has an Indian and Jamaican heritage was born in 1964 to two parents active in the civil rights movement. Shyamala Gopalan, from India, and Donald Harris, from Jamaica, met at the University of California, Berkeley, and after their divorce, Harris was raised by her late mother, whom she considers the most important influence in her life.

In her victory acceptance speech, Harris aimed at inspiring young girls, saying “While I may be the first woman in this office, I will not be the last. Because every little girl watching tonight sees that this is a country of possibility.” She then went on to praise Joe Biden for breaking all barriers and being truly progressive in his approach towards selecting a woman as his running mate in the road to the presidency.

Thanking all those who voted for the democratic administration, Harris said, “Thank you for turning out in record numbers to make your voices heard. And I know times have been challenging. Especially in the last several months. The grief, sorrow, and pain. The worries and struggles. But we have also witnessed your courage, your resilience, and the generosity of your spirit. For four years, you marched and organized for equality and justice. For our lives, and for our planet. And then, you voted. And you delivered a clear message.” This reference to the widespread protests against the Republican rule which was led by former President Donald Trump drew an immense cheer from the swarm of supporters at Delaware.

Telling the nation they made the right choice and praising Biden in what seemed like an elevator pitch for the new administration, the VP said, “You chose hope and unity, decency, science. And yes, truth, “You chose Joe Biden as the next president of the United States of America. And Joe is a healer. A uniter. A tested and steady hand. A person whose own experience of loss gives him a sense of purpose that will help us as a nation reclaim our own sense of purpose.”

Intending to inspire women of color, and all women, for that matter, Harris claimed “the generations of women, black women, Asian, white, Latina, Native American women, who throughout our nation’s history have paved the way for this moment tonight. Dream with ambition. Lead with conviction, and see yourselves in a way that others may not.”