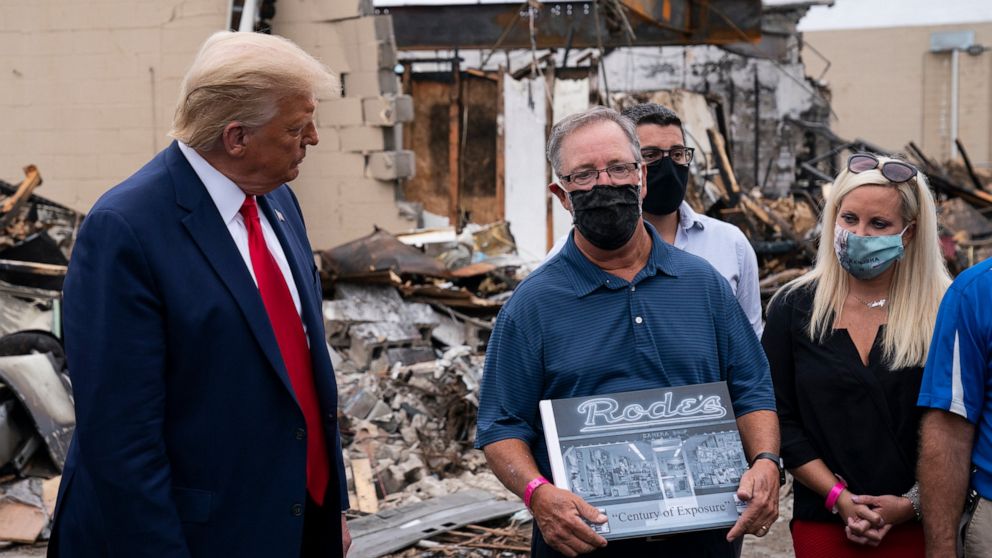 On his visit to Kenosha, Wisconsin on Tuesday, the US President, who visited the city to address the brutal police killing of Jacob Blake, took a self-justifying stance on the matter. Denouncing the racial justice protests as being acts of “domestic terror”, President Trump went on to deny the existence of any systemic racism within US law enforcement.

Despite being adjured by local officials not to make the visit at such a delicate time, the president set foot in Kenosha on Tuesday, where protesters have persevered in demanding justice for Jacob Blake, for the second week after the brutal police shooting. On August 23, three police officers were involved in an encounter that led to shooting 29-year-old  Blake seven times in the back.

Local officials and members of Blake’s family had requested that Trump not make the visit, as it would further agitate the situation, which has at times turned violent with property damage and two protesters killed in a violent shooting last week.

Elaborating this sentiment, Justin Blake, Jacob Blake’s uncle said in a “community celebration” during Trump’s visit, “We don’t need more pain and division from a president set on advancing his campaign at the expense of our city. We need justice and relief for our vibrant community.”

After landing in Wisconsin, Trump took to touring the dilapidated remains of a block that was affected by the protests and spoke to the owners of a century-old furniture store that had been destroyed in the midst of the two-week-long agitation.

As a means of garnering political advantage, he blasted Democrats for what he described as “enabling the violence and again took credit for deploying the US National Guard to the city”. Talking to law enforcement officers, he mentioned his governmental efficacy in deploying the Guard, even though Wisconsin’s governor activated the troops and sought reinforcements from other state forces without the involvement of the federal government.

In a round table with law enforcement, Trump condemned the protests and said, “These are not acts of peaceful protests, but really domestic terror. Reckless far-left politicians continue to push the destructive message that our nation or our law enforcement are oppressive or racist, they’ll throw out any word that comes to them.” He went on to add that US cities and suburbs are under threat of being swallowed by “looters”, “rioters” and “agitators”.

During the trip, Trump also vowed to build up law enforcement in the country, pledging $1m to the local police force in Kenosha, $4m to help rebuild businesses in the city, and $42m to promote overall public safety in the state.