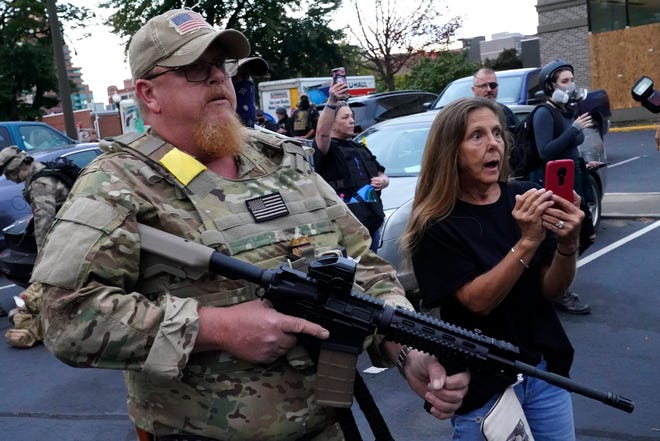 Louisville Protesters Step Out Despite Curfew, Some Counter-Protesters Wield Arms

Defying a citywide curfew on Thursday night, protesters took to the streets the second consecutive day after the Breonna Taylor hearing. Apart from another intense face-off with the police, protesters were also met with armed counter-protesters claiming to “defend the Constitution.”

It has been reported, that at one point, late at night, protesters came face-to-face with about a dozen armed counter-protesters who were trying to deter people from causing damage to the country. A man, clad in military attire, complete with a camouflage helmet and a green vest told reporters that he was a member of the “Oath Keepers” and had come to Louisville from North Carolina.

According to their website, the Oath Keepers are “a nonpartisan association of current and formerly serving military, police and first responders” whose goal is to “defend the Constitution.” The Southern Poverty Law Center describes them as “one of the largest radical anti-government groups in the U.S.”

Severely disappointed with the Grand Jury’s decision of not slapping the police officers in Taylor’s case with any charges, except the wanton indictment for one, protesters stormed the city for the second night, on Thursday. Gathering in hundreds and chanting Breonna’s name with the hopes of ushering in racial equality and police reform, hundreds of protesters marched from Jefferson Square Park through downtown Louisville.

Armed with guns, the counter-protesters told the media that the group had arrived, not to harm the protesters, but to protect local businesses from suffering damage in the midst of the violent protests. Whilst being confronted by several protesters, some people beseeched the group to maintain distance, so as to not harm anyone with the weapons.

Reaching a negotiated end at around 11 PM, one-hour past curfew, the police made numerous arrests from 10 PM, when the curfew was imposed. Among those arrested was state Rep. Attica Scott, the Democratic lawmaker sponsoring a bill to end no-knock warrants like the one used when Taylor was shot and killed in March.

Meanwhile, in New York, a group of about 250 people marched at Rochester, in a protest organized by a group called Free the People Roc. They called for public accountability and later sat quietly in the street outside the city’s Public Safety Building, not resorting to any violence.