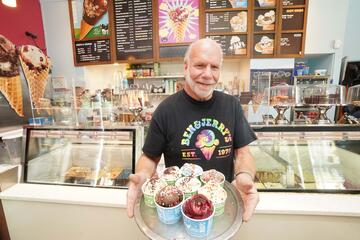 Standing strong in the face of adversity, Joel Gasman, a Jewish man who runs a Ben & Jerry’s store on West 104th Street and Broadway in the Upper West Side of Manhattan, made a strong statement against the ice cream maker’s recent anti-Israel decision.

Gasman decided to donate 10% of his profits to fund educational causes in Israel, in stark contrast to the corporate ice cream maker’s politics.

While speaking to the NY Post, Gasman mentioned the current loss in footfall at the store due to the decision- all amidst the fact that they’re still recovering from the pandemic. He told the outlet, “It has definitely hurt our bottom line and our overall store value. We did fear boycotts from customers. We still do. We’ve lost some foot traffic as well as bigger catering jobs that usually help us during the summer. We’re getting bad reviews online that have nothing to do with the store, only in regards to the corporate’s views.”

Gasman went viral on Facebook on Monday with his statement that read, “As independent franchise owners with Ben & Jerry’s, we feel the recent actions by its corporate office do not reflect our personal views, and we’re saddened by the impact that this has had on our business and the Jewish community.

We are proud Jews, Americans, and active supporters of the New York Jewish community and State of Israel. We think the only concern you should have when coming into our store is deciding if you want rainbow or chocolate sprinkles!

Starting today we’ll be donating 10% of our profits to State of Israel educational causes. At this time, we ask for your support so that we can continue to operate and, in turn, support our community.”

The post generated over 380 comments, and many commentators said they would pay a visit to the store to support their pro-Israeli stance.