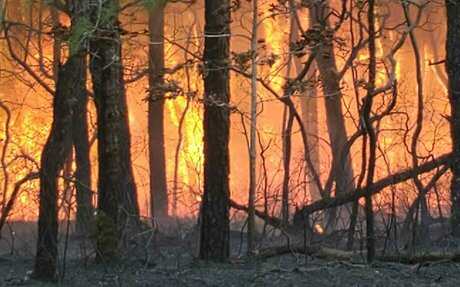 A massive forest fire engulfed New Jersey on Sunday, destroying and severely damaging around 30 homes and commercial properties on a stretch of land in Lakewood. Given an impetus by dry and airy conditions, the fire also injured a firefighter.

According to local media reports, the fire started in Lakewood at about 1 p.m. on Sunday and later moved into Brick. The Garden State Parkway was closed for hours between exits 83 to 90 due to a large forest fire that started off Airport Road and was later opened for traffic at 10 PM last night.

Brick Mayor John G. Ducey said 29 homes were damaged in Brick Lake Park, a neighborhood off Cedar Bridge Avenue, as a result of the fire that spread over 100 acres between Lakewood and Brick. Three of the damaged homes are uninhabitable, Ducey said. Maris Gabliks, a spokesman for the New Jersey Forest Fire Service, said the fire was traveling eastward, driven by Sunday’s blustery, dry conditions. Firefighters trained in both structural and wildland fires from across Ocean and Monmouth counties were responding to the blaze.

An office building was damaged completely while another sustained partial damage. Hundreds of people were evacuated from homes and commercial buildings along the fire’s path, Maris Gabliks, a spokesman for the New Jersey Forest Fire Service, said earlier Sunday.

In a report by NJ.com, the fire’s footprint was less than a quarter of a football field when first reported about 1 p.m. near Airport Road and Cedarbridge Avenue, but by 6:30 p.m., the flames had spread to about 162 acres, officials told the outlets. It remained an active fire Sunday night, and firefighters were expected to be at the scene and in the area all night and into today, fire officials said.

The weather service issued a “red flag warning” that conditions in the region presented a threat of fires, particularly Sunday and continuing into Monday. New Jersey has been without significant rainfall since March 1, said AccuWeather meteorologist Matt Greene. A four-day warmup that brought temperatures into the 60s concluded Friday but rains are not expected until tomorrow.