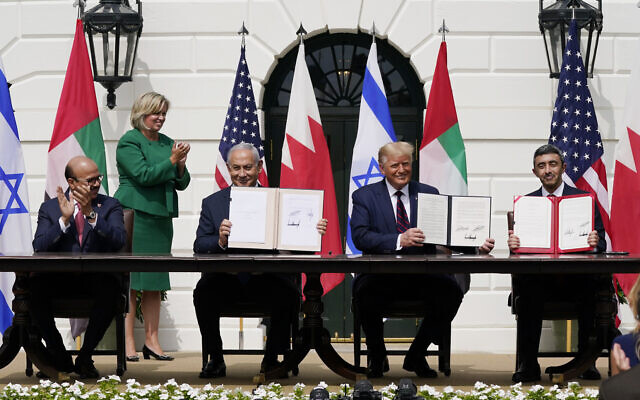 Mauritiana and Indonesia Were Next In Line To Normalize Ties With Israel, Say Trump Officials

After the Trump administration’s success in normalizing ties between UAE, Bahrain, Morocco, and Sudan with Israel, officials claimed that officials were set to get Mauritiana and Indonesia to do the same, but alas, time ran out.

Two US officials told The Times of Israel this week that the Trump administration was closing in on agreements with Mauritania and Indonesia to be the next Muslim countries to normalize relations with Israel, but ran out of time before the Republican president’s term ended.

According to the report, an agreement with Mauritania was the closest to being reached, with US officials believing they were just weeks away from finalizing a deal. The northwest African country was identified by the Trump peace team led by senior White House adviser Jared Kushner and special envoy Avi Berkowitz as a likely candidate to follow the United Arab Emirates, Bahrain, Sudan, and Morocco in normalizing with the Jewish state, given that it once had relations with Israel.

There have been several incidents that point towards the fact that Mauritiana would have effortlessly normalized ties with Israel. One such instance is that after the UAE agreed to normalize ties with Israel in August, Mauritania’s Foreign Ministry issued a statement offering tepid support for the deal, saying it trusted Abu Dhabi’s “wisdom and good judgment” in signing the accord. Mauritania also has close ties with Morocco, which similarly established relations with Israel in the 1990s only to break them off several years later.

Moreover, Mauritania became just the third member of the Arab League to establish full diplomatic relations with Israel in 1999 but severed ties 10 years later against the backdrop of the 2008-2009 Gaza war.

Moving on, the next most likely and highly consequential candidate to join the so-called Abraham Accords was Indonesia, the US officials said, claiming that a deal could have been inked if Trump had another month or two in office. With a population of over 270 million, Indonesia is the world’s largest Muslim country. That gave it “extra symbolic importance,” to the Trump administration, which maintained that the Israeli-Palestinian conflict need not be a hindrance to peace between the Jewish state and the Muslim and Arab worlds, a US official explained.

“Mauritania and Indonesia are high on the list, but it changes based upon various circumstances,” said one senior US official this week. “You can put every country on the list, to the point where Iran will eventually join the Abraham Accords.”

“I hope the Biden administration takes advantage of this because these are good for everyone. Peace is not a Republican ideal or a Democratic ideal,” said the senior official.