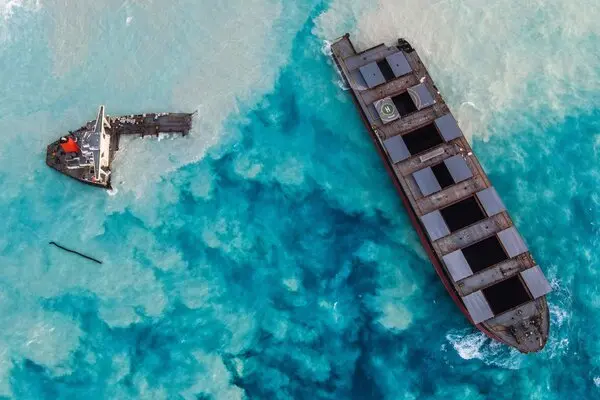 In a recent turn of events, Mauritius officials have arrested the captain and second-in-command, in charge of the Japanese MV Wakashio bulk carrier. This comes nearly a month after the carrier wreaked havoc with a devastating oil spill that was announced as an environmental emergency in the country.

Affecting one of the world’s most pristine maritime environments, the Japanese-owned MV Wakashio struck a large coral reef on July 25 and began spilling oil on August 6. The carrier broke into two parts near Blue Bay Marine Park, severely affecting the aquatic landscape in the area.

Claimed to be a major ecological disaster by prominent ecologists and scientists, the spill spread over a vast area of endangered corals, affecting fish and other marine life on a gargantuan scale.

The arrests of the captain and second-in-command came after they were charged with endangering safety navigation. However, it is still unclear as to why the carrier, which was making its way from Singapore to Brazil, had come this close to the island country.

Post taking the two accused into custody on Tuesday,  police spokesman Inspector Shiva Coothen commented, “We(Mauritian police) arrested the captain and his second-in-command today. They were taken to court on a provisionary charge. The investigation continues from tomorrow with the interrogation of other crew members.”

Hinting at the possibility of negligence, an anonymous official claimed that despite a series of warnings by the Mauritius coastguard, the ship continued to tread on a dangerous course without due reconnaissance. “The route set five days before the crash was wrong and the boat navigation system should have signaled that to the crew and it seems the crew ignored it. The boat also failed to send out an SOS, and did not respond to attempts by the coastguard to get in touch,” the official said.

The crew has been questioned over various causal events including an alleged party onboard and an attempt to get closer to land in order to obtain a wi-fi signal. A thorough investigation as to what exactly led the carrier to a collision is still underway.

To contain the ongoing and impending damage that the oil spill could have on the environment, Japan announced the assignment of a second team of seven experts to help clean up the spill, after sending the first team of six people.

The new team will be adequately equipped with special oil-absorbent materials donated by a Tokyo-based company.