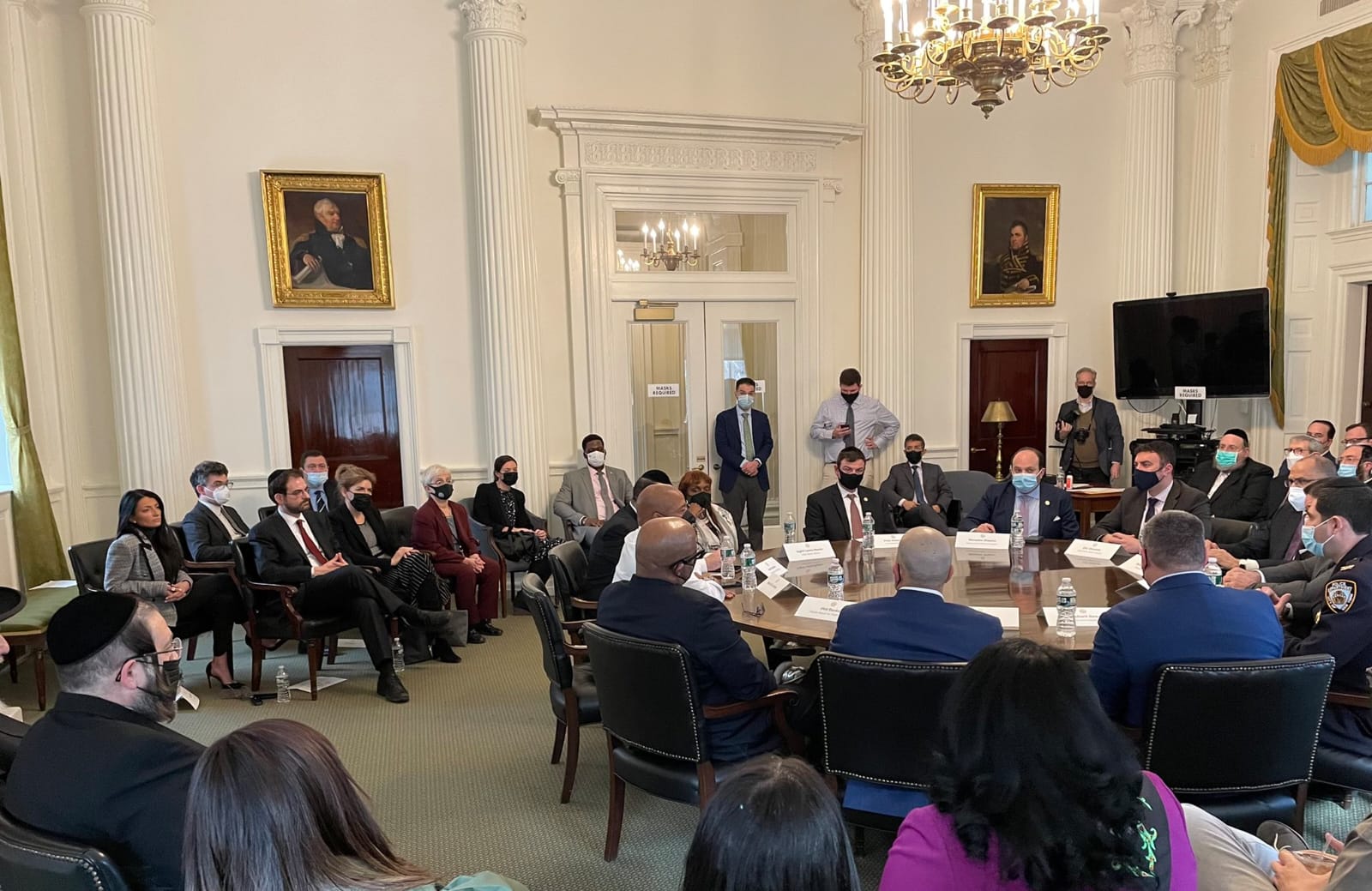 The meeting was arranged by Fred Kreizman, the commissioner of the mayor’s community affairs unit, and Joel Eisdorfer, the mayor’s new senior advisor. It included members of the NYPD, the Jewish caucus of the City Council, many other city agency representatives, and Jewish community leaders representing all five boroughs.

With an uptick reported by the NYPD of anti-Semitic crimes in New York City increasing by nearly 300 percent when compared to the same month in previous years, this was not just a symbolic meeting. It was highly necessary.

and the recent outrageous unprovoked attack on a pair of young men in Bayridge, one of whom was wearing an IDF hoodie –  https://yidinfo.net/outrageous-jewish-teens-beaten-for-clothing-choice-called-dirty-jews-in-anti-semitic-attack-in-bay-ridge/)

Mayor Adams’ immediate response to attacks as he has placed himself directly at the forefront of the fight against hate crimes since he took office is something that speaks volumes to the community. The fact that there are finally consequences to these hate crimes is something that attendees are hopeful will finally send a message to those on the street who have been enjoying the wild west attitude with next to no repercussions for criminal actions until now. As demonstrated by the significant move of arranging for such a meeting in his seventh week in office, the mayor’s prioritizing this concern also speaks volumes of his priorities.

“Everyone in the city should not just be safe, but feel safe,” Mayor Adams told attendees. “We will do anything and everything to stop hate crimes.”

This includes reassigning employees under his watch. This is what the mayor did on Wednesday, reassigning Jessica Corey, the former head of the NYPD’s Hate Crime Task Force after an Asian crime victim claimed her allegations of bias were treated dismissively.

“If you try to hide the problem or deny it, you are not going to be able to fix it,” the mayor said.

The mayor has already arranged for more uniformed police officers to be deployed to Jewish areas on Shabbos when Jews feel more vulnerable without phones to act as deterrents to thugs.

“By working together, we will see a light at the end of the tunnel,” Rabbi David Niederman, Executive Director and President of UJO Williamsburg, told Yid Info. “This necessary and positive meeting discussed specific courses of action which will be followed through to educate and protect our community under our new Mayor’s administration.”