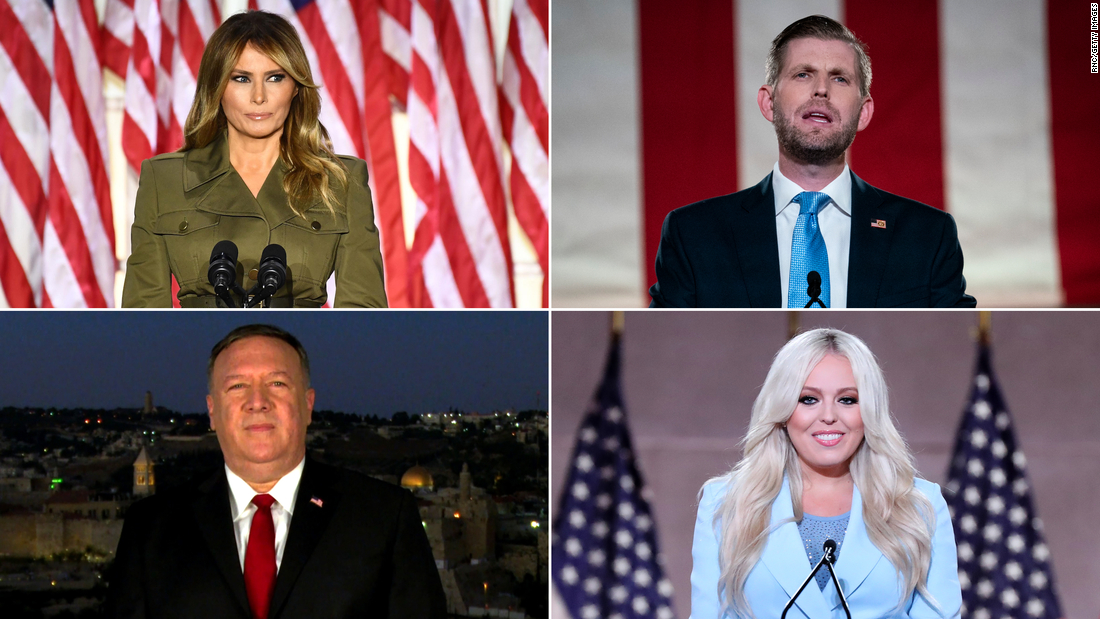 Melania Trump Wraps UP Day 2 of RNC, Pompeo Joins In From Jerusalem

In the run for a second-term presidency at the USA elections 2020, the Republican National Convention’s second day featured Mike Pompeo, Melania Trump, and two of the president’s children- Tiffany and Eric Trump, speaking at the event.

The first lady delivered the closing speech on the second night of the RNC in a rare political-appearance wherein she vouched for support for her husband’s re-election. Live from the Rose Garden of the White House, she also touched upon the topic of the coronavirus, which was, in fact, ignored and gone unmentioned throughout the convention.

She went on to say that, “I want to acknowledge the fact that since March, our lives have changed dramatically,” adding that the Trump administration would continue to work towards developing a vaccine. “Donald will not rest until there is a cure, “ she expressed.

Secretary of State Mike Pompeo spoke through a pre-recorded speech from Jerusalem about how Trump’s “America First” foreign policy has made the world safer, with a focus on Trump’s support for Israel.

With a far-right approach, he proclaimed that “The president moved the US embassy to this very city of God, Jerusalem, the rightful capital of the Jewish homeland.”

The pre-recorded address faced quite the criticism from Democrats and other critics since it breached decades of diplomatic code of conduct and a possible violation of federal law prohibiting executive branch employees from overt political activism while on duty. Ironically, Pompeo himself had reminded the State Department staffers of these inappropriate behaviors last month.

The second day also saw a naturalisation ceremony in which acting Homeland Security Secretary Chad Wolf witnessed the oath to five people as Trump looked on. Hailing from Bolivia, Lebanon, India, Sudan, and Ghana. These new citizens were then welcomed by President Trump into the “great American family”, while further adding that, “You followed the rules, you obeyed the laws, you learned your history, embraced our values and proved yourselves to be men and women of the highest integrity.”

Trump’s youngest daughter Tiffany took a strong stand in defending her father, through her pre-recorded speech at the convention. She mentioned that her father is willing to put the country’s needs above his own and that fighting for America is something he will sacrifice anything for. She added that “He dreams big dreams for our country – and he is relentless at achieving them.”

Pushing her agenda further, she criticized the media for deliberately manipulating information without evidence or regard for the truth. “Rather than allowing Americans the right to form our own beliefs, this misinformation system keeps people mentally enslaved to the ideas they deem correct,” she said. “This has fostered unnecessary fear and divisiveness amongst us.”

The other addresses at the event included Vice President Mike Pence’s nine-minute video titled ‘Lincoln’, which featured the stories of six Americans whose lives have been helped by the Trump administration, Nicholas Sandmann, a high-school activist, Abby Johnson, a vocal abortion opponent and Senator Rand Paul among others.