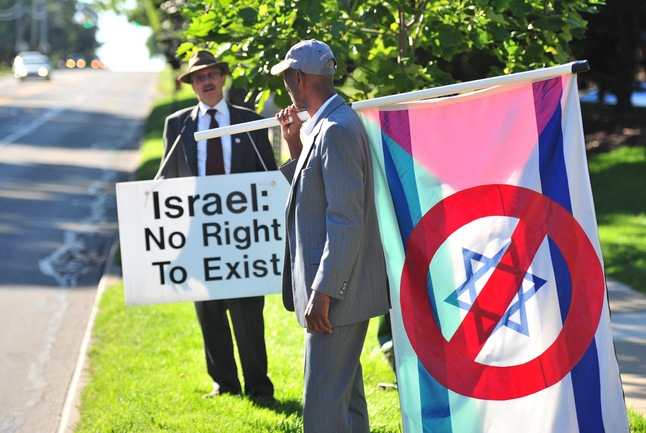 After enduring weekly protests on Shabbat outside the Ann Arbor, Michigan synagogue for 20 years, the Jewish attendees appealed to the court this week arguing for more enforcement to prevent the viciously antisemitic demonstrations. Signs held by the protestors include “Jewish Power Corrupts,” “Resist Jewish Power,” and “No More Wars for Israel.”

Members of the Beth Israel Congregation were in court this Tuesday for a case that was presented before a Sixth Circuit panel. The congregations wished to revive First Amendment claims against the city of Ann Arbor, as well as the group of antisemitic protesters who have demonstrated near its entrance every Saturday morning since September 2003.

In 2019, two congregants- Marvin Gerber and Miriam Brysk, filed suit in federal court, alleging the protesters cause them “extreme emotional distress,” and also accused Ann Arbor of failing to enforce several city codes. They have now appealed the decision of US District Judge Victoria Roberts in August 2020 to dismiss calls for the protests to be curbed. Roberts held that the plaintiffs failed to allege a concrete injury that would grant them standing to pursue constitutional claims, and reinforced the protesters’ right to gather peacefully outside the synagogue.

Lawyers for Gerber and Brysk argued that Judge Roberts misinterpreted the scope of the relief they requested, which they claim involved only “the imposition of reasonable time, place and manner conditions” on the protests, and not to completely disband them. “The court deliberately mischaracterized the relief they were seeking, claiming they were seeking a blanket injunction against the protesters’ exercise of free speech in all public areas, in order to set up a straw man which it could easily knockdown,” the brief states.

The Ann Arbor protests have occurred weekly, timed to Shabbat morning services, for nearly two decades, and are largely organized by anti-Israel activists Henry Herskovitz and Chris Mark. Other signs at the Beth Israel protests have included slogans such as “Jewish Power Corrupts” and “End Jewish Supremacism in Palestine.”

Congregants have long argued that the protests made it impossible for the Conservative congregation to take on activities such as hosting the homeless or helping refugees; they also said they thought the city had not tried to help the synagogue. “They fill our sidewalks with hate speech to harass our worshippers, and then claim it’s just a good public location,” Rabbi Nadav Caine said in a statement after Roberts’ ruling.

As of now, there is no timetable set for the court’s final decision.