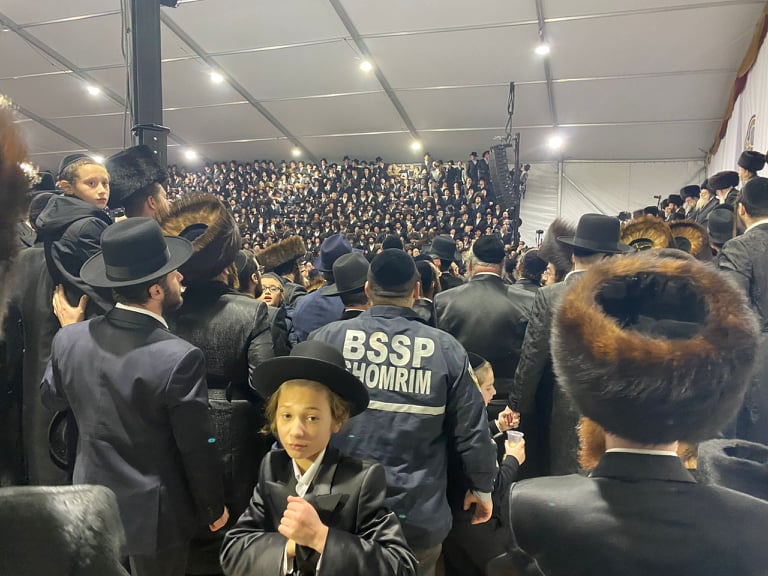 More than 10,000 people flock to Boro Park for Shabbos with HaRav Shaul Alter

More than 10,000 people went to Boro Park this Shabbos and join the tefillos and tishen of the Gerrer Rosh Yeshiva, Hagaon Harav Shaul Alter.

The massive tent built on Friday at 18th Avenue and 52nd Street became a perfect place for us people to see Rav Shaul Alter.
The religious activity officially began Friday afternoon with a packed mincha followed by a short shiur from Rav Shaul’s brother, Rav Daniel, and then maariv.

To inspire the attendees, the rosh yeshiva spoke three times during the tish, with all gathered in the tent hanging on to his every word, despite the difficulty of hearing him because there were no microphones.

Sources said the Shabbos morning davening was held at 8:30, with hundreds packed into the shul/tent to catch a glimpse of Rav Shaul as he davened in his usual, fiery fashion.

During Shabbos afternoon a huge group of people could be seen entering Boro Park, including hundreds who walked in from Williamsburg and numerous other areas, for the chance to spend a little time with Rav Shaul.

Thousands of people can be seen packed into the specially-erected tent and thousands more standing outside in the street, hoping to hear a vort and perhaps catch sight of Rav Shaul.

In front of thousands of people, Rav Shaul then delivered four fiery derashos of hisorerus, compelling the crowd to devote themselves to torah and avodas hashem, with more zemiros between the derashos.

The attendees were struck by both the gadlus and anivus of Rav Shaul, with all walking away with a deeper appreciation and commitment to strive for greatness.