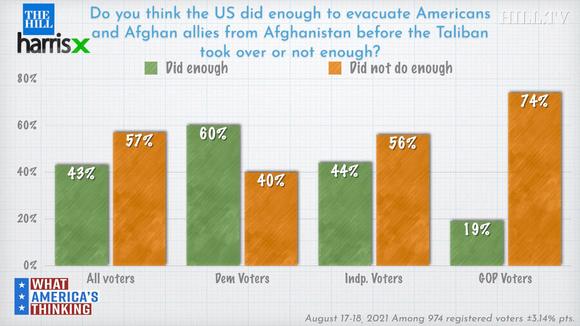 Most Americas believe the US didn’t do enough to quickly evacuate Americans, Afghan allies

The latest poll has shown that most American voters believe the US government didn’t do enough to evacuate Americans and Afghan allies from Afghanistan before the Taliban took over.

In a poll conducted by Hill-HarrisX poll last August 17-18, 57 percent of registered voters believe the U.S. did not do enough to quickly evacuate Americans and Afghan allies before the Taliban swept the country, while 43 percent think otherwise.

The poll data has shown that nearly three-quarters of surveyed Republicans and four in 10 Democratic voters — along with 56 percent of Independents — said the U.S. did not do enough before the Taliban took over.

The Taliban captured the capital city of Kabul on Sunday.

The poll also shows that 53 percent of voters disapprove of how the U.S. withdrawal from Afghanistan was carried out by the Biden administration, while 47 percent have shown their approval of the Biden move.

It was also learned that 70 percent of Democrats, 52 percent of Independents, and just 19 percent of Republicans approve of the way the U.S. withdrawal from Afghanistan was carried out.

Moreover, the poll has also shown that 64 percent of voters generally support the U.S. withdrawing from Afghanistan, down from 73 percent in a July poll.

By contrast, 36 percent said they disapprove.