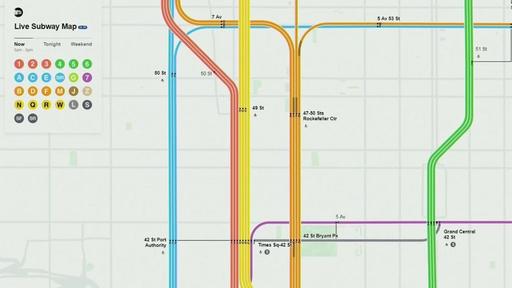 The Metropolitan Transportation Authority has released the beta version of a new digital map of the New York City subway system that provides service updates to riders in real-time. This one-of-a-kind live map will act as a digital guide that navigates trains and their ETA’s- all in realtime.

To look into how the map exactly works, the software uses data from the MTA to update as service changes are happening, allowing users to click on stations and individual train lines to see the actual wait time for the next train. The new map also highlights accessible stations and provides updates to accessibility-related equipment like elevators and escalators.

Furthermore, the map uses the MTA’s data feed to convey official MTA communications for emergencies and indicates which train lines connect with buses and the AirTrain to be able to access the airports. Users can tap or click on an airport to learn even more about how to access the airport using public transportation.

Created by Work & Co., the map, when zoomed in shows little gray blocks moving along the colored lines, depicting the train’s actual movement from station to station. As stated by its makers, the map channels both Massimo Vignelli’s iconic 1972 map and the current map designed by Michael Hertz, combining the geometric and graphic design-friendly Vignelli map with the geographical elements of Hertz.

After the completion of its beta phase, the map will ultimately replace ‘The Weekender’ and will serve as the primary interactive means for moving around the subway system. Riders will then be able to fully and frequently access the map on their smartphones. iPhone and Android users can add the map to their home screen to access the map more quickly.

“We built this map for the weekend warriors,” New York City Transit Chief Customer Officer Sarah Meyer said. “For those who work at night and who are impacted by service changes.”

Now open for feedback from riders, the MTA live subway map is free and is accessible through a browser at Map.MTA.info.