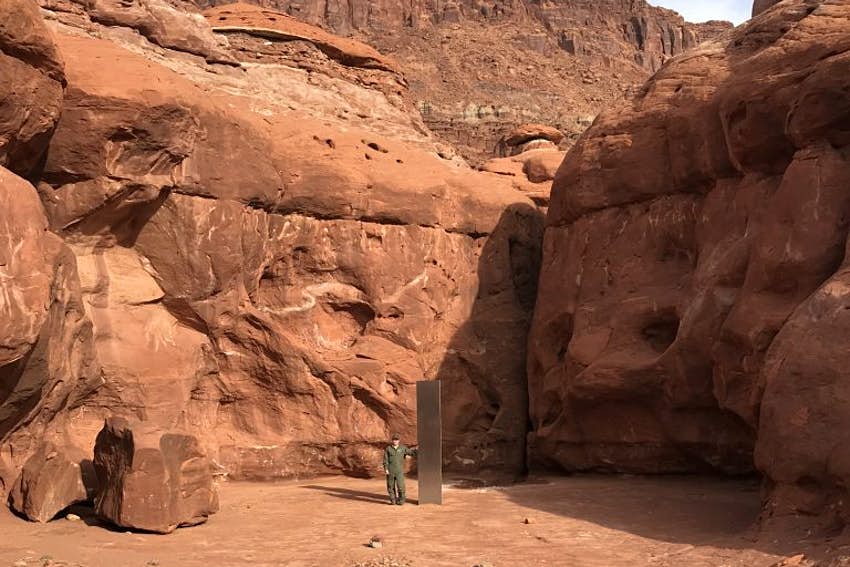 A public-safety crew flying over southeastern Utah unearthed a mysterious and “unusual” monolith in a remote area of the state. While counting bighorn sheep last week in Red Rock Country, the crew spotted a sleek metal structure embedded in the ground is at least 10 feet tall, sparking numerous alien conspiracy theories.

The Utah Department of Public Safety (DPS) said Monday that Aero Bureau and wildlife resource officers were conducting a count of when they spotted the object and landed nearby to investigate further. The shiny, triangular pillar, which protrudes approximately 12 feet from the red rocks of southern Utah, was spotted last Wednesday with no obvious indication of who might have put the monolith there.”

Bret Hutchings, a DPS helicopter pilot, told KSLTV that the unexplained 10- to the 12-foot-high structure is the “strangest thing that I’ve come across out there in all my years of flying.” However, he had some theories of what it could be.

“I’m assuming it’s some new wave artist or something. Or, you know, somebody that was a big ‘2001: A Space Odyssey’ fan,” Hutchings said. DPS said it is illegal to install structures of art without authorization on federally managed lands, “no matter what planet you’re from.” The Bureau of Land Management will investigate further.

“We were kind of joking around that if one of us suddenly disappears, then the rest of us make a run for it,” Hutchings told the station.

The department said it would not reveal where the monolith is located because the structure is in a remote area and tourists may require rescue if they get stranded. Bureau of Land Management officials is investigating how long it’s been there, who might have created it and whether to remove it.

Meanwhile, netizens were taken aback by the photos and videos of the object, with many noting the object’s similarity with strange alien monoliths that trigger huge leaps in human progress in Stanley Kubrick’s classic sci-fi “2001: A Space Odyssey.” On the other hand, some observers pointed out the object’s resemblance to the avant-garde work of John McCracken, a US artist who lived for a time in nearby New Mexico and died in 2011.