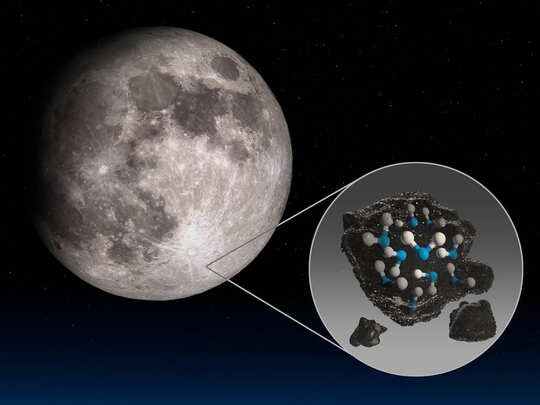 NASA Makes A Stellar Discovery About The Moon

In a striking new discovery, NASA revealed on Monday that there’s more water on the moon than what was speculated before. Making the announcement from the Stratospheric Observatory for Infrared Astronomy (SOFIA), the speakers stated that this revelation could  “contribute to Nasa’s efforts to learn about the Moon in support of deep space exploration”.

Paul Hertz, Jacob Bleacher, Naseem Rangwala, and Casey Honniball, were the seniormost speakers to have made the announcement, which has now followed a series of extensive researches on the space agency’s efforts to find water on the moon. As claimed by the scientists during the conference, the water, which was spotted on the sun-lit portions of the moon, is possibly trapped in “glass beads’’ about the size of a pencil tip in the moon’s soil.

Saying that the water may also be tapped as a possible resource for multiple uses including drinking to the extraction of oxygen for astronauts to breathe, Paul Hertz, NASA’s astrophysics director assessed that “This discovery that water might be distributed across the lunar surface and not limited to the moon’s sunless poles, raises the possibility that it could be accessible as a human resource.”

This is the first time water has been discovered in areas other than the shadowed portions of the celestial body, which is astonishing, especially since scientists had previously believed that water would not be able to survive under the direct glare of the sun. During the announcement, it was revealed that the water was discovered in the southern hemisphere of the Moon in a crater, measuring an equivalent of ” a 12oz bottle of water”.

Casey Honniball of NASA’s Goddard Space Flight Center in Greenbelt, Md. said the liquid may have come from the combination of hydrogen molecules in the moon’s solar rings with the oxygen in its soil. “We think the water is trapped in these glass beads … which protects and preserves them,’’ Honniball said.

A remarkable discovery in itself, scientists also claimed that there may be an estimated 15,000 square miles of frozen water on the Moon, which could have possibly come from the solar wind or micrometeorites.