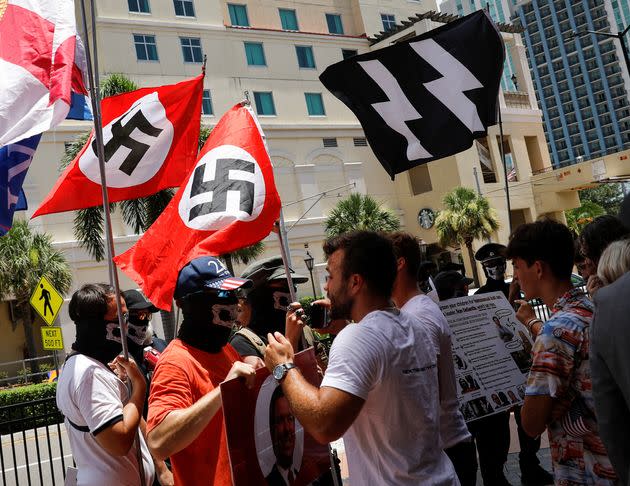 Jewish groups have unleashed an outcry against a deplorable neo-Nazi protest staged outside a conference for conservative students in Tampa, Florida.

In response, Mike Igel, chairman of the Florida Holocaust Museum, which is located a half-hour drive from Tampa Convention Center, said the protest was a “direct threat” to the local Jewish community. “Carrying the Nazi flag, or that of the SS, the unit responsible for some of the worst atrocities of the Holocaust, is an indefensible act of pure hatred,” Igel said. “This isn’t about politics or religion. It’s about humanity.”

Turning Point USA spokesman Andrew Kolvet also spoke out saying, the organization’s security attempted to remove the individuals but had no recourse as they were located on public property. “We have no idea who they are or why they were here. They had nothing to do with TPUSA, our event, or our students. Our students, after initially confronting them, ultimately took the mature route and vacated the space. Once that happened, these individuals left.”

Florida Senator Rick Scott (R) called the demonstration a “disgusting act of hateful antisemitism.” He wrote on Twitter: “[It] doesn’t belong in Florida, our nation or anywhere across the world,” he said. “We stand with our Jewish community and against this hate. It must end.”