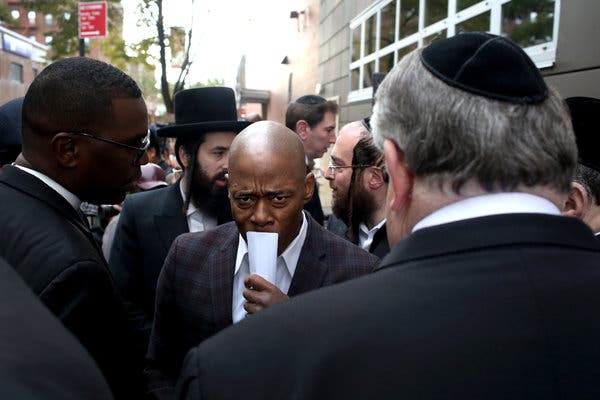 According to a poll by Politico released on Wednesday evening, Brooklyn Boro President Eric Adams, who is running for Mayor, seems to be in the lead in NYC’s Mayoral Race 2021.

As per the Politico Poll, Adams topped the list at 21 percent, followed immediately by Andrew Yang who stood at 18 percent, and City Comptroller Scott Stringer who had an overall 15 percent support. The poll tally was taken after a three-day survey conducted by Washington, D.C.-based firm GQR, according to a copy of the survey obtained by Politico.

While Jewish communities are splitting their votes majorly between Andrew Yang and Eric Adams, the advantage seems to be in the hands of Yang, who is relatively new to the community as compared to Adams who has spent many years as an NYPD Officer, a NY State Senator, and now Brooklyn Boro President, and is no stranger to the Jewish community. What seems to be a tight race between the two candidates, a poll conducted around the same time by the pro-charter school group StudentsFirstNY put Yang slightly ahead of Adams 22 percent to 17 percent. Whereas, a mid-April survey by NY1 gave Yang a comfortable nine-point lead over Adams.

As it stands, the Jewish community in Brooklyn has a massive part to play in the NYC Mayoral Race 2021, which is to be held on the 22nd of June. New York City has about 1.5 million Jewish residents, which by far the largest population of Jews in the United States. A study from PrimeNY has also estimated that up to 14 percent of city voters are Jewish, and their votes, therefore, matter considerably.

This year, the community seems to be leaning a lot more towards candidate Yang, who, over the past few months promised to get tough on anti-Semitic hate crimes and stand against the Boycott Divestment and Sanctions movement against Israel, which he declared was “rooted in anti-Semitic thought and history.”

According to Jewish leaders in the city, the decision would ultimately come down to the issues, including a plan to fight anti-Semitism in New York, maintaining strong ties with Israel, affordable housing, and security for schools and synagogues.