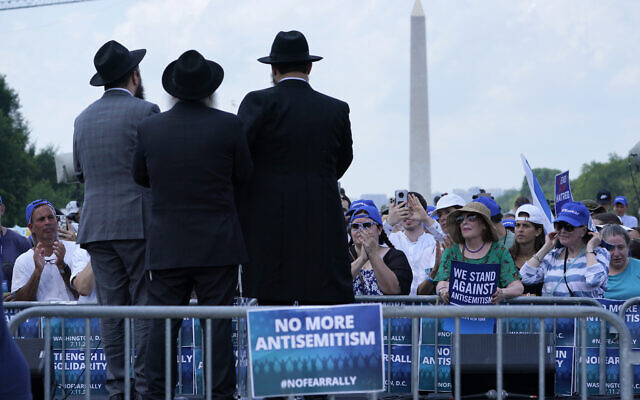 “No Fear” Rally Denounces Antisemitism At US Capitol Hill With 2,000 People In Attendance

On Sunday, the “No Fear” rally witnessed the coming together of the Jewish community, standing in the face of adversity as antisemitic incidents continue to see a rise in the US. Held in front of the Capitol, about 2,000 rally-goers denounced antisemitism and stated that the Jewish identity and support for Israel go hand-in-hand.

Among the speakers at the event were those who were victims of antisemitic assaults in recent years. Chabad-Lubavitch Rabbi Shlomo Noginsky, who sustained stab wounds in a July 1 attack in Boston, appeared with his arm still in a sling, saying “I was born in the Soviet Union in the city of St. Petersburg. I remember how even as a young child, I experienced terrible antisemitism. Never in my darkest dreams did I imagine that I would feel the same way here in the United States, the land of freedom and endless possibilities.”

Also speaking at the event was Rabbi Jeffrey Myers, who described saying the viduy, the Jewish prayer before death, as a gunman shot 11 worshipers dead in the Tree of Life synagogue in Pittsburgh in October of 2018. Myers was the first to alert the police of the attack. “We hold these truths to be self-evident that all men are created equal, that they are all endowed by their Creator with certain unalienable rights, among them life, liberty and the pursuit of happiness,” Myers said, quoting the Declaration of Independence. “To be an antisemite means you do not accept that pact of being an American.”

Major mainstream groups like the Anti-Defamation League, the American Jewish Committee, and B’nai B’rith International, as well as the Orthodox Union and Reform and Conservative movements, signed on as sponsors of the event while speakers included Melissa Landa, who leads the Alliance for Israel, Noa Tishby, an Israeli actor, who appeared with conservative pundit Meghan McCain and Alma Hernandez, a Democratic state lawmaker in Arizona, Elisha Wiesel, the son of the late Holocaust diarist and Nobel Peace Laureate Elie Wiesel, and more.