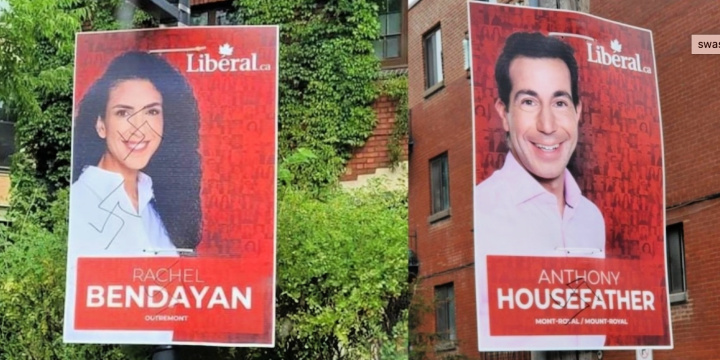 After an antisemitic vandalism spree in Toronto, Canada which included the defacing of a synagogue, Jewish groups and residents have urged action from the Canadian government.

Of the numerous incidents, one included the shameful defacing of a Toronto synagogue with a swastika on Wednesday. In other instances, antisemitic graffiti was found on a local school, a sign denouncing antisemitism and election posters for Jewish political candidates in Montreal. Furthermore, a sign calling for “#nohate against Jews” was defaced with “Free Palestine” and “Zionists aren’t Jews.”

Reacting to the slew of incidents, the Friends of Simon Wiesenthal Center President and CEO Michael Levitt said in a statement, “This rash of antisemitic incidents reaffirms what Toronto Police hate crime statistics had revealed, which is that antisemitic attacks are on the rise and the Jewish community continues to be the most victimized group. It’s extremely disturbing to see such anti-Jewish hate be spread across the Greater Toronto Area. It’s urgent for all Canadians to reject and call out antisemitism in all its forms and work to eradicate this type of hate from our society. Hate against any one of us is hate against us all.”

Canadian Prime Minister Justin Trudeau also offered his reaction to the defacing of the Jewish political candidate posters saying, he was “disgusted” and “angry” over the incident. “It is completely unacceptable,” he said. “I stand in solidarity with Rachel and Anthony, and the entire Jewish community, against this type of hatred.”