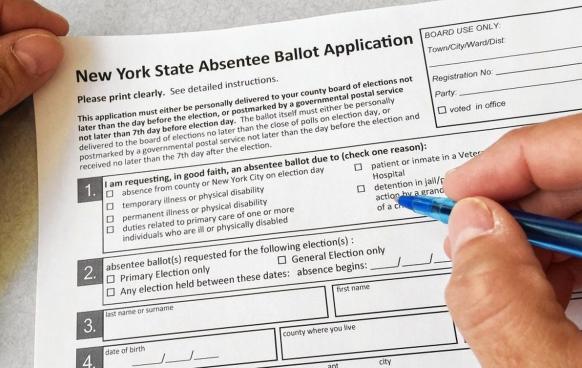 As prescribed by the new state law, thousands of New Yorkers whose absentee ballots were disqualified for mailing errors will now be given the time and opportunity to make necessary corrections, a week after the election.

As reported by the NY Post, the city Board of Elections preliminary report which was released on Tuesday found that 96 percent of the 713,536 absentee ballots received in the mail during the coronavirus pandemic were deemed valid. The remaining

four percent or 15,330 ballots were disqualified for filing errors, but these can be rectified now, as per the state laws. This decision follows the heated controversy over the failure of mail-in ballots in determining the election results.

Under the new law, voters have up to five days to correct the defect after being notified by election officials to fix the defect. As of the four percent of erroneous ballots, 6,132 ballots could be corrected for technical glitches, but most of the remaining 60 percent or 9,198 ballots were invalidated because a voter had already cast a ballot in person, and therefore cannot be corrected.

Going ahead, voters for the first time will be contacted by phone, email, or mail with requests to “cure” small errors such as missing signatures or unsealed envelopes, which the board estimates will apply to about 40% of the problem ballots. Voters would then fill out a “cure affirmation” and send it back to the board by email, fax or mail, or by completing the form in person at a Board of Elections office.

The NYC BOE didn’t start counting mail-in ballots until Tuesday and some counties in the state won’t begin until next week. Under the law, the canvass of the votes must be completed by Nov. 28.

Criticizing this move strongly, Sen. Deputy Majority Leader Michael Gianaris (D-Queen) said, “All that should be left on Election Day is feeding the paper into the machine. We are the latest state in the country to tabulate results. Thank God we are not a swing state because otherwise, this would be a national scandal. There is no good excuse for election results to continue to be up in the air weeks and months after people have already cast their votes. If Florida can count absentee ballots right away, New York can do it.”

Earlier in June, President Trump also slammed the New York BOE for its incompetence in being able to handle absentee ballots. The department was forced to resend absentee ballots to 99,000 voters in Brooklyn after its printer in September mailed the wrong names and addresses on its ballot return envelopes.