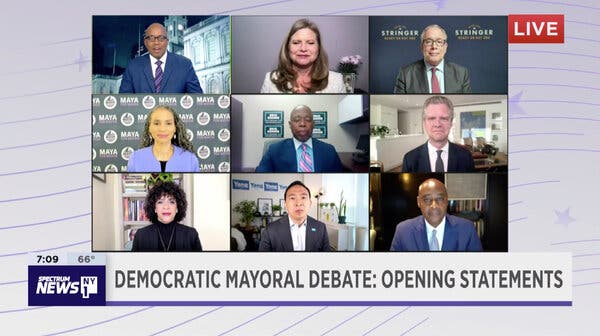 NYC Mayoral Candidates Battle It Out During Second Mayoral Debate

Hosted on Thursday night by Spectrum News NY1, all 8 of NYC’s Mayoral candidates battled it out in the second televised debate before the upcoming June 22nd elections. Centered around topics ranging from school reopenings, vaccination drives, and crime and public safety, these are the top highlights of the debate.

Starting off with school issues, all eight of the Democratic candidates running for Mayor said they oppose requiring that teachers get the coronavirus vaccine before the upcoming school year. Meanwhile, only two candidates: Brooklyn Borough President Eric Adams and former city Sanitation Commissioner Kathryn Garcia said they would preserve the requirement that students take the Specialized High School Admissions Test as the criteria for entry into the city’s top high schools.

Moving on, when WNYC radio host Brian Lehrer asked the candidates to raise their hands to indicate whether they would require that students get the COVID vaccine, five of the candidates said they would: Garcia, Stringer, entrepreneur and former presidential candidate Andrew Yang, former federal and city housing chief Shaun Donovan and not-for-profit executive Dianne Morales.

At the center of it all, was the question of crime and public safety, which is one of the most pressing issues in the Big Apple, especially considering an alarming rise in gun violence. Adams and Yang have been two of the most moderate voices on policing, and on Thursday, Yang again emphasized the importance of the NYPD. “Let me be clear: Defund the police is the wrong approach for New York City,” Yang said. “You have to start by saying to the police very clearly that you are vital to our city’s recovery.”

On the other hand, nonprofit executive Dianne Morales, whose positions skew furthest to the left among the candidates, argued that “safety is not synonymous with policing.”