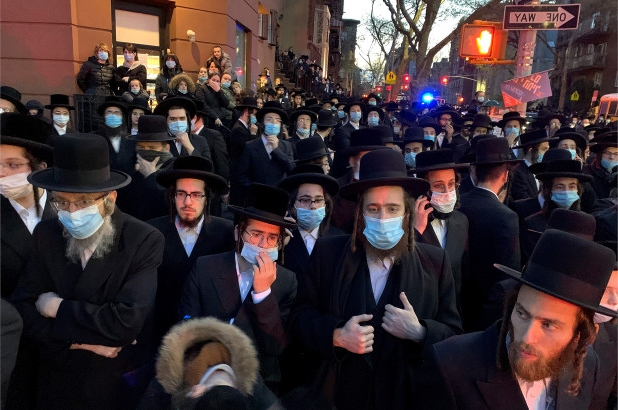 With cases across nine predominantly Jewish neighborhoods spiking up over the last few days, Mayor Bill de Blasio has issued a strict and speedy Test and Trace program that ensures regular testing and enforcement of mask-wearing and social distancing guidelines. But, unfortunately, it has been reported that the teams that have been deployed under the testing and tracing program do not have adequate Yiddish speakers, and the authorities are not co-operating with the local councilman.

According to a report by the New York Post, an inadequate number of less than half a dozen Yiddish speakers are on staff as city officials struggle to contain the growing coronavirus outbreak in several neighborhoods with large Orthodox populations in Brooklyn and Queens.

The program’s head, Dr. Ted Long, confirmed this scarcity in the readout from agency documents when questioned about the shortage of speakers from the community by Councilman Mark Levine (D-Manhattan) during an oversight hearing on Wednesday.

Trying to avoid facing further flak, Long said that the astonishingly low number is just for the time being and that the department is, “ aggressively hiring more.”

Unhappy with the numbers, Levine claimed, “It’s really a problem. It reflects a failure to adapt to the cultural needs, the linguistic needs of this community.”After the hearing, officials told The Post they are seeking to hire 21 people who speak Yiddish, Hebrew, and Russian.

Criticizing Mayor de Blasio’s handling of the outbreak in these nine zip codes across Brooklyn, and claiming that city officials have done little to no outreach in his district, Councilman Chaim Deutsch told The Post that officials struggled to get him timely updates in recent days and that his request for masks to distribute would take a week to fulfill.

“It’s crazy, I shouldn’t even be calling them, they should be calling me!” Deutsch said.

Peeved by the disappointing approach of the city officials towards tackling the uptick in these areas, communities are in the hopes of better administration from the Mayor’s end. Meanwhile, the outer-borough COVID spike is growing, now spanning from Brighton Beach all the way to eastern Crown Heights — with concerning spikes in COVID test rates at Bensonhurst/Mapleton, Borough Park, Gerritsen Beach/Homecrest/Sheepshead Bay’s, Kew Gardens Hills/Pomonok, Fresh Meadows/Hillcrest.