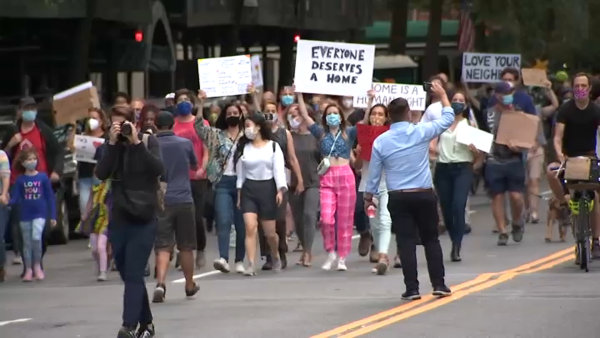 Enraged by the sudden relocation of a hundred disabled homeless from their temporary hotel residences, back to overcrowding shelters amidst the coronavirus pandemic, protesters in NYC marched towards Gracie Mansion on Sunday to deliver a “notice of transfer to Mayor de Blasio.”

Strongly discontent with De Blasio’s plan to boot approximately 100 disabled homeless residents from a Midtown hotel to make way for homeless people relocated from an Upper West Side luxury hotel, protesters crowded Gracie Mansion with a message for the mayor, saying, “It’s time for you to go”. Some 200 protesters showed up at Gracie Mansion to deliver a “notice of transfer” to Mayor de Blasio, similar to the transfer notices sent to homeless shelters and hotel residents telling them they’re being relocated at the last moment.

Angered by the rudeness of the event, protesters claimed that this could happen at any time and to anyone, as long as the interests of the affluent are protected. During the rally, Feliz Guzman, 39, an organizer with Vocal NY, told protesters, ”You find out you are being moved and you do not know where you are going to go. So in the middle of all your issues, you are having and trying to preserve your humanity, you end up being told that you are not welcome there anymore.”

Last week, over 100 disabled residents of the Harmonia Hotel shelter on E. 31st St. were granted less than two days’ worth of time to vacate the premises, so as to make way for the homeless men who were to be moved from the Upper East Side Lucerne.  The residents who had been living at the Harmonia for years were expected to gather everything and move to another shelter in just 48 hours.

This move came after Mayor De Blasio succumbed to the threats, complaints, and a potential lawsuit that was slated to be filed by the swanky Upper East Side residents, claiming that their streets were no longer safe, thanks to the 300 odd homeless people living there temporarily.

Claiming that this could not come at a more unfortunate time, given that a resurgence of a severe pandemic looms over the city, City council member Helen Rosenthal said the mayor still has time to spike the controversial plan. In a statement to the press, beseeching the Mayor to correct his actions, Rosenthal said, “It’s not too late to reverse your decision, no shame. There’s no shame and there’s no shade, we really are just asking the major to reverse his decision at this point.”