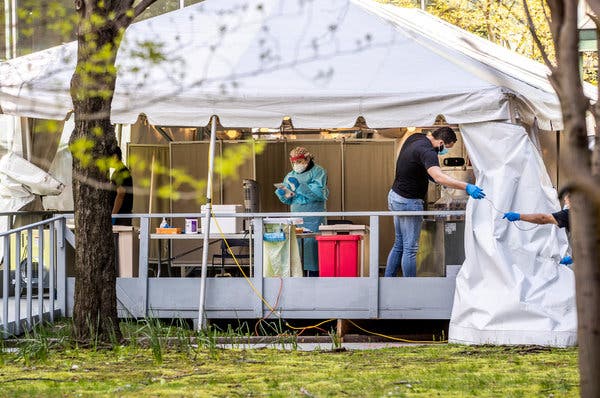 NYC Ramps Up Testing at Public Schools in Brooklyn Hotspots

New York City’s Education Department has amped up large-scale COVID-19 testing in public schools around the nine ZIP codes spread across Brooklyn and Queens, where a spike in cases has been reported, making these areas the new hotspots.

This drive comes after NYC Mayor Bill de Blasio, on Tuesday announced in a press conference that testing and mask enforcement would be made more stringent across the nine neighborhoods of Gravesend/Homecrest, Midwood, Kew Gardens, Edgemere/Far Rockaway, Borough Park, Bensonhurst/Mapleton, Gerritsen Beach/Sheepshead Bay, and Flatlands. Scattered across Brooklyn and Queens, these areas account for 25 percent of all coronavirus cases citywide over the past two weeks.

Under this new initiative that is aimed at an efficient tackling of the spread of the disease, mobile testing labs will be set up outside dozens of public schools in the hotspot ZIP codes over the next two to three weeks, offering free and optional tests to staff, students, and students’ families. In order to ensure that the cases don’t spread further, leading to the closure of schools and businesses in the area yet again, authorities are ensuring strict compliance to all the rules.

As mentioned by de Blasio, if the current transmission rate, which has been shot up to 3.25% after months of calm and quiet, averages 3% or more over seven days, the entire city school system will close to in-person learning, which began for hundreds of students just this week.

Education department spokesperson Nathaniel Styer claimed, “The mobile testing labs allow us to add another intervention layer for our schools in those communities. Mobile testing provides free, prioritized, and convenient testing to schools in these targeted ZIP codes to help us quickly identify any positive cases and their close contacts.”

Under the new initiative, each mobile team will set up tents outside two public schools in hotspot areas each day and can test between 80 and 100 people over three hours. Results would come back in one or two days and around 25-30 schools will get tested each week. This being said, the system that is being introduced is a protocol and not an indication that the school outside which the mobile is stationed is at risk.

The mobile testing initiative will continue to run alongside the random monthly testing city officials plan to roll out in October. Under this new program, a stipulated percentage of students and teachers from each building will get mandatory tests to ensure the safety of the entire block.