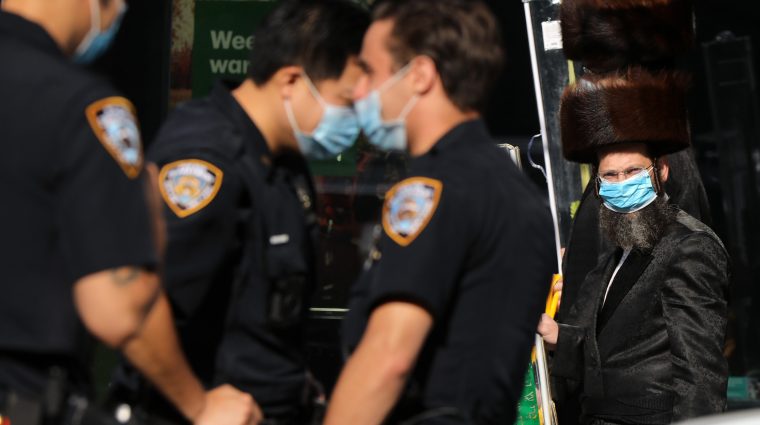 NYPD Collects $150,000 in Fines For Violating New Restrictions in Brooklyn

NYPD Officials charged a total of 62 fines amounting to $150,000 for violations of COVID-19 rules in hot spots in Brooklyn and Queens over the weekend. Among those charged were five religious institutions, the names of which have not been disclosed by the government. The sheriff’s office declined to say whether the places of worship it cited over the weekend were churches, synagogues, mosques or other religious institutions.

In another attempt to single out Jewish communities, several fines have been imposed on residents in the nine zip codes that were slapped with a bunch of new restrictions. A response to the rise in coronavirus cases around Borough Park, Brooklyn, Kew Gardens, and Queens, the NYC administration, led by Governor Andrew Cuomo and Mayor Bill de Blasio, had declared heavy fines and arrests in case of non-compliance of rules, as well as any further protests.

Dampening the joy and fervor of religious festivities over the weekend, Mayor de Blasio announced fines of up to $15,000 for holding big get-togethers and penalties of up to $1,000 for those who refuse to wear face coverings. As part of the new, severely binding restrictions that have been deemed as being quite unfair to the Jewish community, houses of worship in the hot spots haven’t been allowed to host groups of more than 10 since last Thursday.

Talking to reporters on Sunday, Cuomo was heard saying “I understand the desire to organize large religious ceremonies. I understand how important this is to their culture and religion. I also understand that this, in fact, endangers human life…People see that a law isn’t enforced — they dismiss the law.” After two consecutive nightly protests staged by the Orthodox dwellers of the city, the timing of the latest restrictions received immense flak, given that Simhat Torah typically sees synagogues packed with worshipers dancing for hours in celebration of completing the annual cycle of weekly Torah readings, over the weekend.

In their defense, the city government’s Twitter account posted on Sunday, “To keep all of New York City safe, we must work together. The recent COVID outbreaks in Brooklyn and Queens will continue to receive additional FREE resources and strong enforcement.”