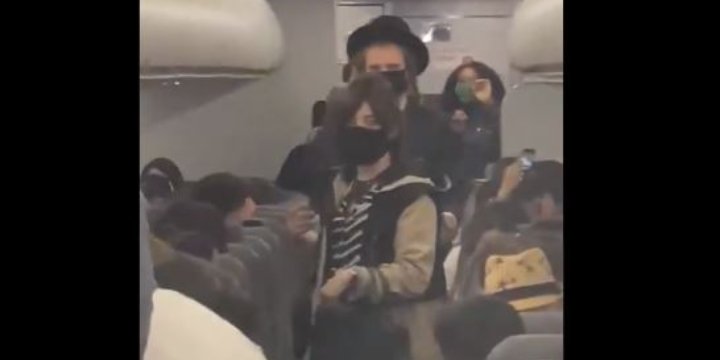 A day after the incident wherein a Chasidic family was thrown out of a Frontier Airline flight from Miami to New York due to their allegedly unmasked 16-month-old baby, numerous organizations, witnesses and lawmakers spoke out against the blatant antisemitic nature of the cabin crew.

The OJPAC, an Orthodox Jewish advocacy group claimed on Monday, that according to video sources and eye-witness accounts, the airline staff high-fived after deplaning the family.“I saw them high-fiving each other, and high-fiving and saying ‘A job well done to those Jews,’” one man said.

In response to the case, the Anti-Defamation League’s New York-New Jersey office has called for a “full & transparent investigation” of the incident, especially since there are humongous gaps between what eye-witness/video records and the airlines’ statements.

While the family claims that its members were properly masked on the Sunday night flight from Miami to New York City, except for an 18-month-old baby, the airline says the baby was not the issue that prompted the eviction, and that adults in the group that were removed from the plane were not wearing masks. Videos posted by OJPAC show several Hasidic Jews standing in the aisle, all wearing masks. Multiple people say in the videos that the only unmasked passenger is the baby. In one video, a Hasidic woman says that kids briefly took off their masks to have a snack.

After facing flak on Twitter, the airline wrote- “Members of a large group, including adults, refused to wear masks as flight 2878 was preparing for departure from MIA-LGA. Repeated requests to comply with federal law necessitated their removal from the flight. The issue did not stem from a child under 2.”

Reacting to this response, several Twitter uses pointed out the clear contradiction between the videos and the statement released by the Airline company, with Chaskel Bennett saying, “There are videos &  eyewitness accounts that directly refute your position. Your staff took a manageable situation & embarrassed these people & then high five’d it. Your discrimination has been exposed & it’s ugly. An apology & crew suspension is a good start. Make this right.”

NYS Assemblyman Simcha Eichenstein also responded to the matter saying, “I just spoke with a passenger who was on the @FlyFrontier flight and heard firsthand about the outrageous and blatant anti-Semitic treatment of Orthodox Jews on this flight. The hateful behavior by the flight crew is inexcusable and must immediately be investigated.”