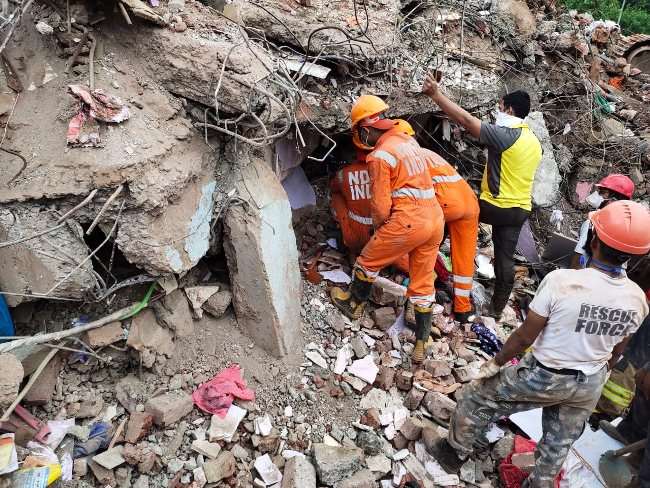 One Dead, 25 Trapped and 60 Rescued After A Disastrous Building Collapse in India

Rescue operations are still underway at the Raigad district of Maharashtra, India, where a 5-story building collapsed yesterday. While 60 people have been rescued, one person has died and 25 are still feared trapped under the debris of the fallen residential building. The building, which was about 10 years old, had over 45 flats.

The rescue operation featuring the three teams of the NDRF (National Disaster Response Force) and 12 teams of the fire brigade,  has been going on for more than 12 hours. Amid a heavy downpour and fears of coronavirus infections, local residents and police combed through tin sheets, metal rods, and other wreckage in a desperate search for survivors.

Expressing his condolences and concern over the incident, India’s Prime Minister Narendra Modi tweeted, “Saddened by the building collapse in Mahad, Raigad in Maharashtra. My thoughts are with the families of those who lost their dear ones. I pray the injured recover soon. Local authorities and NDRF teams are at the site of the tragedy, providing all possible assistance.”

The office of Uddhav Thackeray, chief minister of Maharashtra state, said on Twitter that he had been in touch with local representatives in the area.

“He has assured them that all possible support will be extended for speedy rescue and relief works,” the tweet said.

Visuals covered by the Indian media show the rescue teams and volunteers working tirelessly at the spot, attempting to rescue the remainder of residents still stuck inside the rubble. In a video tweeted by the NDRF, sniffer dogs were also seen assisting the officials. Another footage shows the area around the spot covered in a huge cloud of dust as a part of the building collapsed to the ground.

Though the cause of the collapse hasn’t been determined, the possibility of the construction having a weak foundation is quite high. In a recent report by the National Crime Records Bureau, more than 1,200 people were killed in 1,161 building collapses across India in 2017, showing a trend in the destruction of residential and commercial building due to shoddy construction, substandard materials and disregard of regulations.

Former Mahad legislator Manik Motiram Jagtap told the local TV9 Marathi channel that the structure was 10 years old and built on “weak” foundations. “It fell like a house of cards,” he added.

A case has been registered against the contractor of the building, Yunus Shaikh, and the architect. The probe on this incident will begin as soon as the rescue operations are concluded.