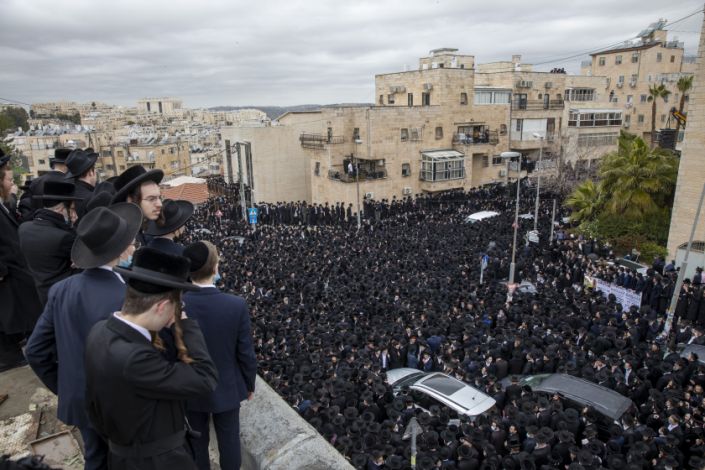 On Monday, the Israeli police Police summoned for questioning the organizers of two mass funerals of ultra-Orthodox rabbis that took place in Jerusalem on Sunday. Claimed to have been attended by thousands of people, amidst the lockdown restrictions, the funerals were held in honor of two prominent Rabbi’s, both of whom died of the coronavirus.

According to a report by Israel’s  Channel 12 News, following intense criticism of police’s failure to prevent the mass crowds, the Israeli police force is now making a specific effort to investigate the people behind the call for thousands of the rabbis’ followers to attend the funeral processions.

It has been estimated by the media that around 8,000 people showed up to Jerusalem’s Bukharim neighborhood Sunday night for the funeral of the Kamenitz yeshiva head, Rabbi Yitzchok Scheiner, who died of COVID-19 at age 98 earlier in the day. This was the second funeral attended in volume on Sunday. The first was the funeral of Rabbi Meshulam Dovid Soloveitchik, the head of the Brisk Yeshiva in Jerusalem and the scion of the Soloveitchik rabbinical dynasty, who had died early Sunday morning at the age of 99. His funeral was attended by an estimated 10,000 people.

Calling on strict action to be taken against those who organized and led the event, Nachman Ash, who oversees all coronavirus related matters in the nation, urged police to bring the organizers to justice. “Yesterday there were two mass funeral events… I strongly condemn these mass violations of the lockdown,” Ash said during a briefing with journalists. “I call on leaders to prevent such incidents, I call on the police to act to prevent such gatherings. The lockdown continues, and every day of adherence to all guidelines and procedures is extremely important,” he stressed.