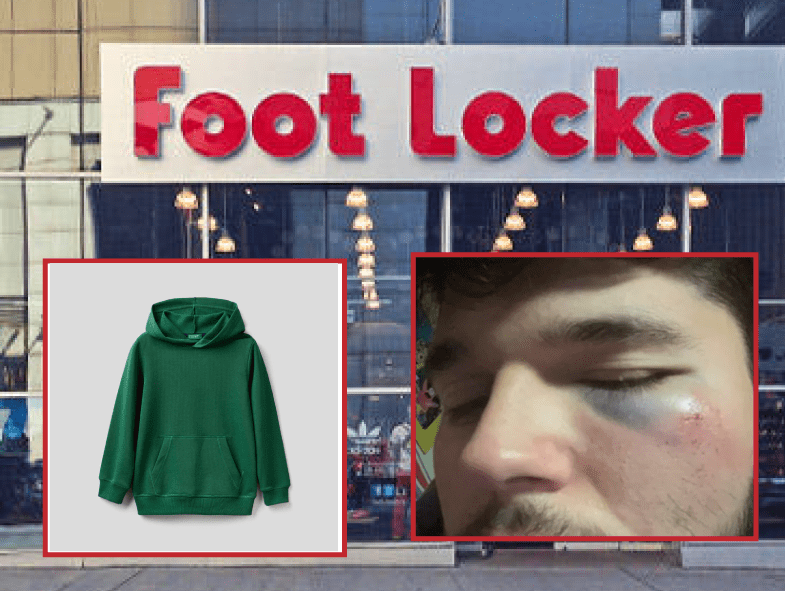 Standing outside Foot Locker, two 21-year-olds were waiting for the store on 459 86th Street in Bay Ridge to open at 10:55 Sunday morning, December 26.

Blake Zavadsky, who was wearing an olive green IDF sweatshirt with the yellow Mogen Dovid and Hebrew lettering on it was approached by a pair of thugs in their 30s who demanded, “You have five seconds to take that off, or I’ll punch you.”

When the young man refused to comply and instead backed off to avoid a confrontation, he was punched in the face. The perpetrator’s ring cut into his face and he also had iced coffee thrown at him.

All the while, the attackers were screaming curses at him, including “Dirty Jew!” and “You dirty Jews! What are you doing in my neighborhood?” When Blake turned around to avoid further confrontation, he was punched in the back as well.

“You had better stay away, or we are going to beat the s*** out of you also!” Blake’s friend, Ilan Kanovich, was threatened when he immediately stepped forward to intervene. He was shoved back, preventing him from taking any action before the two miscreants ran off towards 4th Avenue.

At this point, the manager of Foot Locker came outside. He had been watching what was going on with other employees from behind the safety of locked doors. None of the employees took any action while the alteration occurred, but now the manager stepped outside after unlocking the door.

“Who spilled the coffee here?” he demanded to know.

Ilan responded that the guys who ran off had spilled it. When the manager began to clean it up, Blake asked if he could have a napkin due to the blood running down his face. The manager refused and offered no assistance at all.

“Everyone was watching what was happening,” Albina Zavadsky, Blake’s mother, told Yid Info, “and they wouldn’t even open the door!

“I am originally from the Soviet Union. My parents left Russia so as not to be oppressed and so they could live in a country where they could practice their religion. And now, this is the kind of world we live in right now that we have to be afraid to walk down the street and show who we are?

“I’ve lived all my life here, and now it’s come to this. Do I have to take down my mezuzas as they did in Natzi Germany in 1936? My grandfather fought in the war not to have this!”
Albina also shared her son’s pride, both that he didn’t answer back and that he didn’t take off the IDF sweatshirt even when he was threatened.

In a tweet, Governor Kathy Kathy Hochul strongly condemned the attack,
“Yesterday, two Jewish men were verbally & physically attacked in Brooklyn. This is abhorrent and unacceptable. Antisemitism & all hate has no home in New York.

This scurrilous attack comes close on the heels of the discovery of swastika graffiti found at Gravesend Park on 18th Avenue and 56th Street in Borough Park earlier on the same day. Both crimes are still currently under investigation.

The two attackers are said to be in their mid-30s.

“Yet another vicious attack on Jewish New Yorkers for the offense of being Jewish. Antisemitism on the streets of New York City has become commonplace. As long as criminals know there are no consequences to their crimes, this will never end,”
Councilman Kalman Yeger told Yid Info.
“It’s not enough that the police apprehend the vicious perpetrators. Criminals must be prosecuted and punished to the fullest extent of the law, not set back out in the cycle of the revolving-door criminal justice system, as we’ve become so accustomed to seeing.” Yeger said

ADL (the Anti-Defamation League) is offering a reward of up to $5,000 for information leading to the arrest and conviction of the individual(s) responsible for the attack

We are outraged by this brazen attack and urge anyone with information to come forward,” said Scott Richman, ADL New York/New Jersey Regional Director. “We hope this reward helps send a clear and unequivocal message that crimes like these are unacceptable and have consequences.”

Councilman Justin Brannan who represents the district, issued a statement via Twitter condemning the incident. “Antisemitism isn’t just a problem for Jews. It’s a problem for ALL of us. Where antisemitism exists so does hate and discrimination of all kinds.” Brannan tweeted,
“This is reprehensible and not what our diverse community is about. These actions must be condemned by all.”

If you have any information about the incident which is being investigated as a hate crime, please contact the NYPD Hate Crime unit immediately at 1-800-577-TIPS