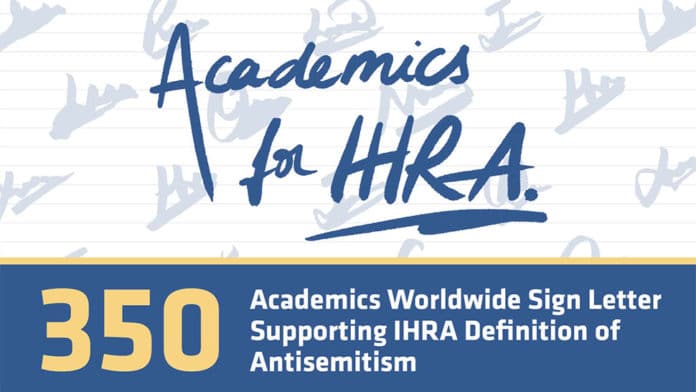 Addressing the urgent need to adopt a core definition of Antisemitism around the globe, over 350 academicians and officials from across the world have signed an open letter, calling for the International Holocaust Remembrance Alliance (IHRA) working definition of antisemitism to be used and adapted to, worldwide.

Signed by academics, diplomats, and intellectuals from the US, Europe, Australia, Israel, and United Arab Emirates, the open letter acknowledges the IHRA definition of antisemitism as “an invaluable tool that recognizes the various manifestations and garbs of contemporary antisemitism.”

According to the IHRA definition, which has been adopted by 31 governments around the world, “antisemitism is a certain perception of Jews, which may be expressed as hatred toward Jews. Rhetorical and physical manifestations of antisemitism are directed toward Jewish or non-Jewish individuals and/or their property, toward Jewish community institutions and religious facilities.” The document elaborates that “criticism of Israel similar to that leveled against any other country cannot be regarded as antisemitic,” while acknowledging that manifestations of antisemitism “might include the targeting of the state of Israel, conceived as a Jewish collectivity.”

Some of the signers of the open letter include historian Prof. Jan Grabowski, who is at the center of a precedent-setting, Holocaust-related libel case in Poland; UCLA Computer Science Professor Judea Pearl; Israeli diplomat and former Israel Ambassador to the UK Ron Prosor; as well as numerous scholars from leading universities including Oxford University, Cambridge University, Columbia University and the Hebrew University of Jerusalem.

Judea Pearl, who also happens to be the father of Daniel Pearl, an American journalist for The Wall Street Journal who was kidnapped and later beheaded by Al-Qaeda terrorists in Pakistan in 2001, said, “Adopting the IHRA definition of anti-Semitism is not a perfect cure for Zionophobic hostilities on U.S. campuses. I nevertheless support it as a necessary instrument to jolt college administrators out of their deliberate Inaction.” He continued, saying “the primary importance of the IHRA definition lies in equating the demonization of Israel and the criminalization of her creation with the demonization and criminalization of every Jewish child and every Jewish family who, traditionally and organically, view Israel as the culmination of Jewish history and as a cherished symbol of Jewish identity. Such criminalization of an ethnic minority has no place in the public square.”