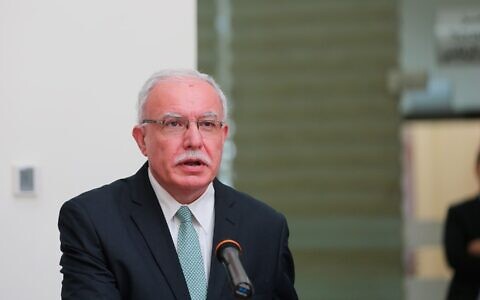 Severing ties with the Trump administration for its pro-Israel stance throughout four years, culminating in the historic Abraham Accords that are the biggest threat to the Palestinian motive, Palestinian Authority’s Finance Minister Riyad al-Maliki said that the PA had indirectly informed US President-elect Joe Biden’s incoming administration of its willingness to return to negotiations with Israel on the basis of international law resolutions.

Speaking at the Mediterranean Dialogues Forum on Thursday night, al-Maliki said, “Right now, we are sending clear messages, not only to the Israelis and to the Biden administration, but also to the Europeans and many others, that the Palestinians are ready to reengage completely, with Israel, in renewing negotiations with no preconditions, as long as such renewal is based on already recognized terms of reference — meaning UN resolutions, the Arab Peace Initiative, and international law.”

The Minister, after his statement, confirmed that the PA was in talks with the Biden administration, and was planning on treading cautiously in order to further their goal. On the other hand, Fatah deputy chief Mahmoud al-Aloul, a close confidante of PA President Mahmoud Abbas, told Voice of Palestine Radio on Monday that the PA had reached “a number of understandings” with the incoming administration’s transition team.

Pining for a Biden victory, given their stance on the matter previously,  the PA had severed all ties with the Trump administration after it recognized Jerusalem as Israel’s capital in December 2017. Moving ahead, now, the PA would most likely want the Biden administration to reverse the Abraham Accords between UAE, Israel, and Bahrain, and ensure that re-negotiations took place keeping the Palestinian interest in mind. “We cut all ties with the Trump administration. We refused to take their phone calls for the last three years, and we paid the price for that,” al-Maliki said.

Apart from several other contentious issues, Biden is expected to oppose Israeli government efforts to annex parts of the West Bank, but not to reverse the Jerusalem recognition and embassy move, which might be quite the blow for Israel.

“What we have read and heard in statements from Vice President-elect Kamala Harris regarding a rapprochement with the Palestinian Authority… has really demonstrated to us that there are enough reasons for us to reengage with the administration the moment they take office,” al-Maliki said, referring to an interview Harris gave with an Arab-American news outlet in October.