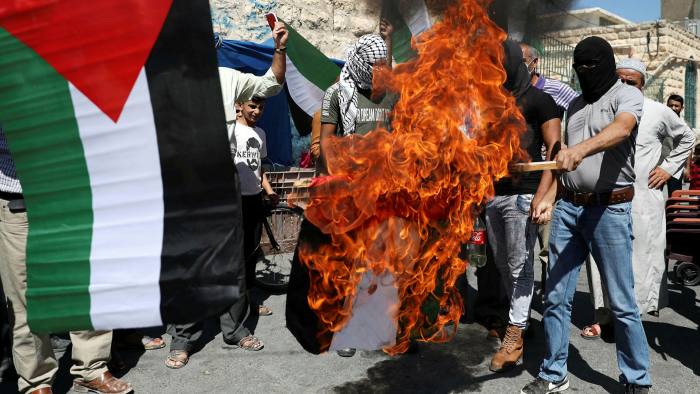 In a desperate attempt to curb more Arab nations from following suit, the Palestinian Authority Prime Minister Mohammad Shtayyeh called on all other Arab states to boycott the signing ceremony of the normalization agreements between Israel and the United Arab Emirates and Bahrain.

Slated to be held at the White House, with all the required social distancing norms in place, the ceremony is a historic step ahead in the normalization of ties between the Arab and Jewish countries.

Tagging the ceremony as “a black day in the history of the Arab nation.” Stayyeh went on to say, “This day will be added to the Palestinian calendar of pain.” As the Palestinians united against the cause of this normalization deal, several factions, including Fatah and Hamas, urged Palestinians to protest against the deal in question, further urging other Arab states to vouch for them as well.

Shtayyeh urged the Arabs states to reject the agreements, saying, “We call on the Arab states to reject the Emirati-Bahraini step and not to participate in tomorrow’s ceremony,” he said. “This Arab normalization with Israel is harmful to Arab dignity. Tomorrow, the Arab Peace Initiative will be killed. Arab solidarity will die.” The leader also directly recalled its ambassadors in Abu Dhabi and Manama to protest the peace deals with Israel.

Referring to the Arab Peace Initiative of 2002, the official reminded everyone that it has been decreed that Arab normalization with Israel only happen after the establishment of an independent Palestinian state with east Jerusalem as its capital.

Condemning the Arab states that have voluntarily taken part in a deal that hampers this Peace initiative, PA accused the UAE and Bahrain of acting in violation of the terms of the Arab Peace Initiative by agreeing to establish relations with Israel in return for nothing. Further commenting on the controversial Al Aqsa Mosque issue, the PA called it a “stab in the back” that has betrayed the Palestinian cause.

Taking a jab at UAE for violating the terms of the Accord, Shttayeh said, “The Palestinian government will recommend to President Mahmoud Abbas that Palestine revise its relations with the Arab League, which remains silent vis-à-vis the blatant violation of its own resolutions, none of which has anyway been implemented. The Arab League has become a symbol of ineptitude.”

Last week, the Arab League meeting consisting of foreign ministers from all Arab countries swiftly turned down a Palestinian draft resolution condemning the UAE for its decision to normalize relations with Israel. Several Palestinian officials and organizations have since called on the Palestinian leadership to withdraw from the Arab League.