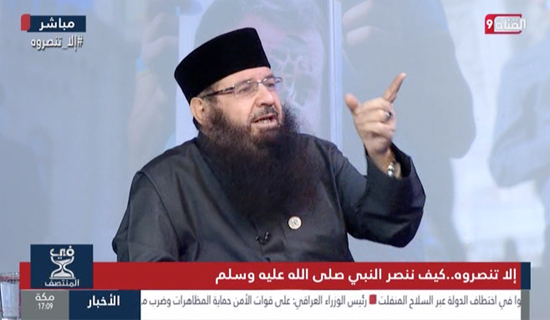 In another horrifying instance of the Palestinian cause against Jews, Palestinian Islamic scholar Mraweh Nassar in a recent interview spewed a narrative of hate by saying the world must be “cleansed” of Jews before Muslims can have true peace.

Unabashedly claiming on television that Muslims will experience a golden age “after the Jews are killed, in the time of Jesus,” Mraweh Nassar, secretary-general of the Jerusalem committee of the International Union of Muslim Scholars stated that the Jews were “the most dangerous enemies.”

In an interview that was aired on Turkey’s Channel 9 on Feb. 10, Nassar, who is the secretary-general of the Jerusalem committee of the International Union of Muslim Scholars, said, “All the other enemies of the (Palestinian) cause are the lackeys of the Jews now,” he said. “Allah clarified this matter [in the Quran]: ‘You shall find the strongest in enmity towards the believers to be the Jews. They will continue to fight you, until they turn you back from your religion if they are able,’”

He went on to “quote” that numerous verses in the Quran hinted upon the fact that Jews were corrupt by nature, saying “If we, as Muslims, really want to live in peace and security, we must get rid of this enemy.” Apparently quoting the hadith, Nassar said Muslims will experience a golden age “after the Jews are killed, in the time of Jesus. Earth will bring forth its blessings, the sky will send down rain in abundance, people will live in peace. Even if someone would put his hand in the mouth of a snake, it would not harm him, and wolves will graze with the sheep. There will be an amazing atmosphere of abundance and prosperity. No one will need charity, because the world will have been cleansed of the Jews.”

Nassar had also previously been in the headlines for claiming that French President Emmanuel Macron is “promoting a Zionist agenda” because his wife is related to the Rothschild family – “the richest Jew.” This statement had come last year, after a knife attack outside a French school on October 16 in which a man beheaded Samuel Paty, a teacher who had shown pupils cartoons of the Prophet Muhammad in a lesson on freedom of speech. The caricatures, first published by a satirical magazine whose Paris offices were attacked by gunmen killing 12 people in 2015, are considered blasphemous by many Muslims.