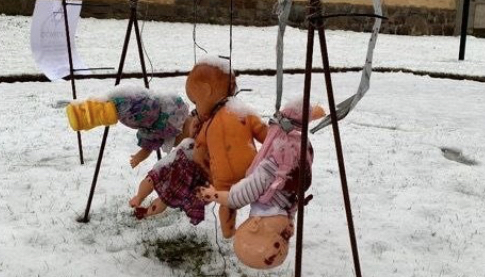 Continuing a series of anti-semitic events, a recent development in Sweden, which is suspected to be a Passover hate crime, saw a bunch of baby dolls splattered with red paint hung outside a synagogue. Alluding to an antisemitic conspiracy theory, the sign placed next to the crime scene read that Passover is a Jewish celebration of the death of Egyptian children.

This gruesome and highly discriminatory scene was discovered in Norrkoping, a city situated 100 miles southwest of Stockholm. Witnesses discovered the display on Sunday morning and reported it to police, who are investigating it as a hate crime. It is believed to have been erected on Saturday night, just as Passover celebrations began.

According to a post from the Anti-Defamation League, the note referred to Passover being a “Jewish celebration of killing thousands of Egyptian children.” The ADL also posted a photo of some of the hanging dolls with what appeared to be red paint or markers on them.

But alas, this wasn’t all for the antisemites residing in the country. On Sunday, the Nordic Resistance Movement, a neo-Nazi group with a history of harassing Jews on Jewish holidays, published on its website a picture of the display that was taken at night. Following this, the Anti-Defamation League on Twitter called on Swedish police to treat the Nordic Resistance Movement as a prime suspect of what had happened on Saturday night.  In its tweet, the ADL said: “We urge the police to take quick action against such intimidation and harassment.”

A disturbing incident on the first night of Passover, shared with ADL by the Swedish Jewish community. Dolls were hung near the synagogue in Norrkoping with a message about Passover being a Jewish celebration of killing thousands of Egyptian children pic.twitter.com/DLT2LUgY5k

As it stands, the description of Passover, a holiday celebrating freedom, as a celebration of death misrepresents the Haggadah, the text that contains the story in which God inflicts 10 plagues of escalating severity on the people of biblical Egypt over their ruler’s refusal to set free the kingdom’s Hebrew slaves. In the final plague, God kills all the firstborn sons of Egypt but passes over the firstborn Jewish sons, giving the holiday its name.

According to the Jewish News Syndicate, Sweden, like many other Western countries, has seen an uptick in anti-Semitism. Last year, several Jewish groups, including the World Jewish Congress, Jewish Central Council of Sweden, and the Central Council of Jewish Congregations in Finland, urged the Swedish government to act against racism and anti-Semitism.