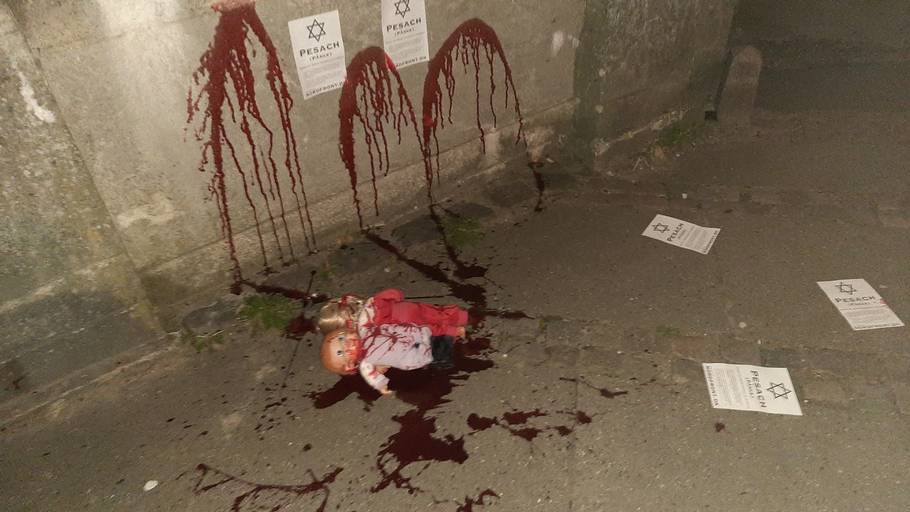 In a second similar incident in Europe over the period of Passover, a Jewish cemetery in Aalborg, Denmark was vandalized with red paint thrown on a wall, dolls with red paint on them, and leaflets calling it a holiday of carnage. The leaflets included a link to a website for Nordfront, which, according to the Combat Anti-Semitism Movement, “promotes the Nordic Resistance Movement.”

The shameful incident was followed just a few days after dolls with red paint were found hanging outside a synagogue in Norrkoping, Sweden. Photos of that vandalism were posted on a website, also similarly affiliated with the Nordic Resistance Movement.

In response to the latest incident, Benny Dagan, Israel’s ambassador to Denmark, said in a post on Twitter: “Strongly condemn this anti-Semitic act in Aalborg using the infamous blood libel of murdering Christian children and baking matzos with their blood. I have full confidence that Danish authorities [will] punish the perpetrators, but Nazi Nordfront has to be outlawed.”

Blood libel or ritual murder libel (also called blood accusation) is an antisemitic canard that falsely accuses Jews of murdering Christian children (or other gentiles) in order to use their blood as part of religious rituals. Historically, these claims—alongside those of well poisoning and host desecration—have been a major theme of the persecution of Jews in Europe. Blood libels typically claim that Jews require human blood for the baking of matzos which they eat during Passover, although this element was allegedly absent in the earliest cases which claimed that then-contemporary Jews reenacted the crucifixion. The term ‘blood libel’ has also been used in reference to any unpleasant or damaging false accusation, and as a result, it has acquired a broader metaphorical meaning. However, this wider usage of the term remains controversial, and Jewish groups object to it.

Meanwhile, Henri Goldstein, chairman of the Jewish Society in Denmark told a local news website, “What has happened, vandalism in the cemetery around Easter, is simply so classic anti-Semitism as it may be. We have seen this for centuries in Europe. You can see that those in Aalborg write on their flyers that the Jewish Passover bread is mixed with blood from Christians. It’s completely insane, and a classic conspiracy theory.”