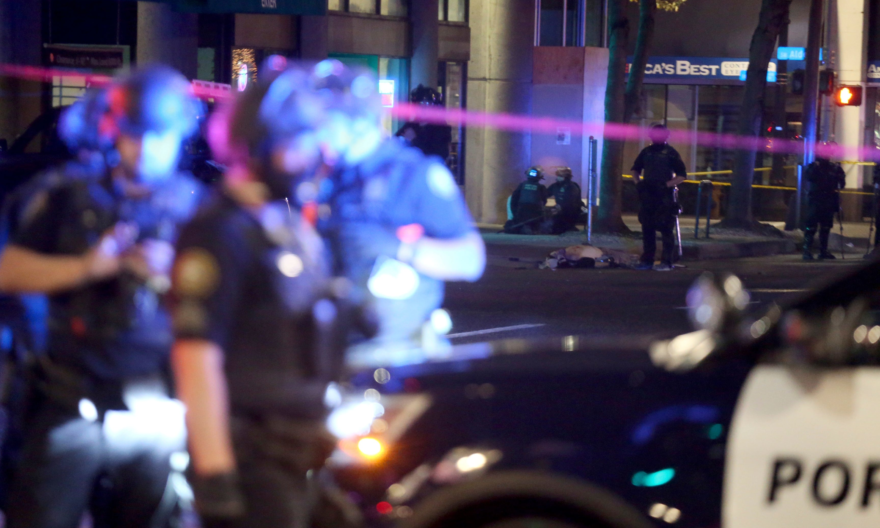 A day after the fatal shooting of a member of the right-wing group ‘Patriot Prayer’ in Portland, a war of words set off between President Donald Trump and Mayor Ted Wheeler. Amidst all the violence and banter, Oregon Gov. Kate Brown on Sunday night announced her plan to end violence in the state’s largest city after months of protests.

Known to have clashed with Black Lives Matter protesters several times in the city, it is still unclear whether the Saturday night shooting was directly linked to the political confrontations. Portland Police Bureau Chief Chuck Lovell has claimed that the department is still unaware of whether the shooting was politically motivated and added the investigation is ongoing and no arrests have been made. He and other officials called for peace.

Meanwhile, after a Twitter war broke out between Trump and Wheeler, pinpointing incompetencies and condemnations, Governor Kate Brown blamed Patriot Player for instigating violence and called upon multiple law enforcement agencies to protect the right to free speech.

Brown stated, “The right-wing group Patriot Prayer and self-proclaimed militia members drove into downtown Portland last night, armed and looking for a fight. Every Oregonian has the right to freely express their views without fear of deadly violence. I will not allow Patriot Prayer and armed white supremacists to bring more bloodshed to our streets.”

She further went on to say, “Time and again, from Charlottesville to Kenosha to Portland, we have seen the tragic outcome when armed right-wing vigilantes take matters into their own hands. Gun violence is never, ever the answer.”

Elaborating upon her peace plan following the incident, Brown has vouched for the Multnomah County District Attorney’s Office to “prosecute serious criminal offenses, including arson and physical violence.” Under the plan, the Multnomah County Sheriff’s Office will hold individuals for violent behavior. Plus, the Oregon State Police will assist PPB and wear body cams while doing so. The governor also beseeched the Washington County Sheriff’s Office, the Clackamas County Sheriff’s Office, and the City of Gresham Police Department to support Portland police. The Oregon State Police is also providing two dozen body cams to the Portland Police Bureau.

“Change will not come overnight, and, as we have seen in these last months, it does not come easily either,” Brown said. “But we are building a more just future.”