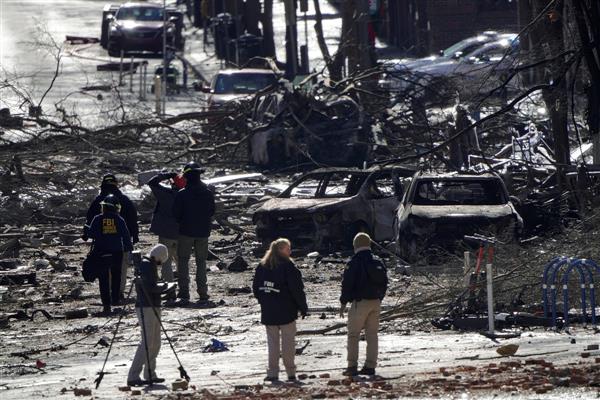 On Sunday, authorities investigating the Nashville blast on Christmas Day said that the 63-year-old suspect involved in setting off a bomb in the recreational vehicle died during the explosion. The blast on Friday damaged more than 40 businesses and injuring 3 people, moments after police responding to reports of gunfire noticed it and heard music and an automated message emanating from the vehicle warning of a bomb.

U.S. Attorney Don Cochran identified the Nashville bombing suspect on Sunday as Anthony Quinn Warner, who was later confirmed by investigators as being dead due to the explosion. FBI forensic experts matched DNA samples recovered from the scene to that of Anthony Q. Warner, whose home in nearby Antioch was searched on Saturday by federal agents. “We’ve come to the conclusion that an individual named Anthony Warner is the bomber and he was present when the bomb went off and that he perished in the bombing,” Donald Cochran, US Attorney for the Middle District of Tennessee, told a news conference.

Douglas Korneski, the special agent in charge of the FBI’s office in Memphis, said there was no indication anyone aside from Warner was involved in the bombing that injured 3 and caused damage to a dozen buildings. The blast impacted several businesses including an AT&T switching center, disrupting mobile, internet, and TV services across central Tennessee and parts of four other states.

Gathering intel about the suspect from numerous witnesses, both- authorities and the media spoke to numerous acquaintances of Warner. The owner of Fridrich & Clark Realty, Steve Fridrich, told the Tennessean newspaper that for four or five years Warner had come into the office roughly once a month to provide computer consulting services, until this month when Warner told the company in an email that he would no longer be working for them. He gave no reason, according to Fridrich. “He seemed very personable to us – this is quite out of character I think,” Fridrich told the newspaper.

Five Nashville officers who were at the scene during the early hours of Friday have been lauded as heroes by city leaders and lawmakers for their sheer bravery. At a news conference on Sunday, the officers recalled the dramatic moments ahead of the explosion before the bomb squad could make it to the scene.