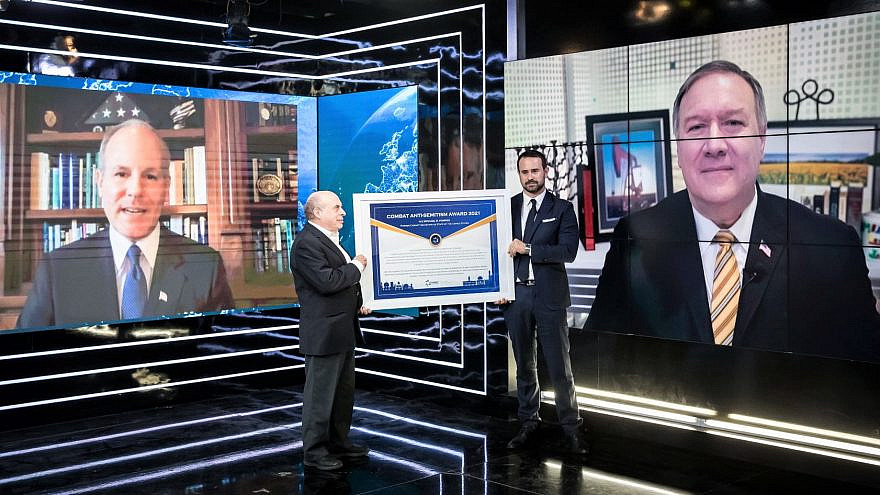 Lauding his efforts in formulating the Abraham Accords and partaking in the fight against antisemitism, former US Secretary of State Mike Pompeo on Monday was felicitated with the inaugural Global Leadership Award by the Combat Anti-Semitism Movement (CAM) at its first annual summit.

Receiving his award from human-rights activist Natan Sharansky and CAM executive director Sacha Roytman-Dratwa, Pompeo was chosen for the honor in recognition of his “exceptional and groundbreaking contributions to the fight against anti-Semitism and religious prejudice of all forms.”

The event hosted by the organization marked two years since the establishment of the movement and was attended by thousands of online audiences from numerous countries. During the event held on Monday, grassroots activists and distinguished speakers from across the world discussed achievements during the past year, and also touched upon the best practices, and challenges that lie ahead.

Morocco’s Ambassador to the United Nations, Omar Hilale also spoke during the event, praising the country’s recent normalization of ties with Israel. He stated, “Of all countries in the region, Morocco has the most deep-rooted history with the Jewish people. We have been starting to revive this history, to educate our children, and to show that the Jewish people are part of our DNA.”

While receiving the award, Pompeo said the Abraham Accords between Israel and the United Arab Emirates, Bahrain, and Morocco represented a paradigm shift in Middle East policy. He said, “For decades and decades, there was a central understanding. If you cannot resolve once and for all, and in its totality, the conflict between Israel and the Palestinians, you can’t advance peace, you can’t advance stability … that was just all wrong.” He added that the accords are a “historic understanding that will change the face of the globe for decades and decades to come.”

When asked if other countries will join the process, he said, “I don’t think there will be just one, I think there will be many more. I hope that the Kingdom of Saudi Arabia can find its way to join the Abraham Accords, I know that many inside that country want that to take place. But there are other nations too that can join … Muslim nations, not just in the Middle East but places like Indonesia as well.”