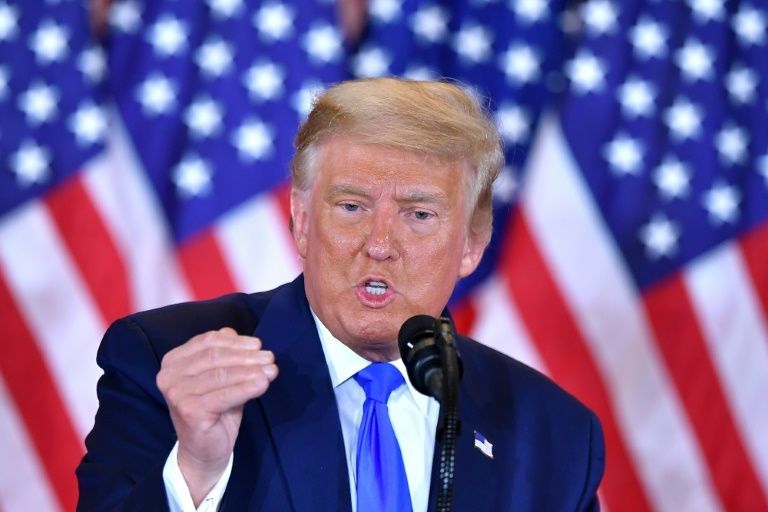 President Trump Addresses The Nation From The White House at 2:30 AM

Two hours after candidate Joe Biden’s Delaware address. President Trump took to the podium at the White House, to deliver a speech to the citizens of the United States, amidst the hubbub of the live election updates.

Claiming victory in key states despite the fate of several states was still undecided, President Trump took to addressing the masses and hinted that the White House would push the Supreme Court to rule over disputed ballots, warning that “a very sad group of people is trying to disenfranchise that group of people, and we will not stand for it, we will not stand for it.”

Furthering this thought, the President said sorrowfully, “we were winning everything and suddenly it was just called off.” He claimed that the campaign was ready to celebrate, and cheered, “we didn’t win [Florida], we won it by a lot.”

“We won the great state of Ohio, we won Texas by 700,000 votes and they don’t even include it in the tabulations,” he went on to say, claiming also that he has won Georgia and North Carolina.

Coming to the flip in Arizona, where Joe Biden, as of the early hours today, was seeing a clear win, Trump said, “we have a lot of life” in Arizona, claiming it’s possible they will lose, but there’s still a lot of votes to be counted. Continuing with these predictions, the President said he is winning Pennsylvania by a “tremendous amount” with up to 690,000 votes in Pennsylvania and that it’s “not even close.”

Referring to the ballot mishap in the state, Trump said, “All of a sudden, I said, what happened to the election? It’s off. You know what happened. They knew they couldn’t win, so they said, let’s go to court.” Trump added that he predicted a legal battle, and said he has “been saying this since the day I heard there would be tens of millions of ballots sent,” referring to the unprecedented scale of mail-in voting amid the coronavirus pandemic.

“This is a fraud on the American public. This is an embarrassment to our country.” He also stated that he has Michigan, leading by nearly 300,000 votes, and Wisconsin.

The president, speaking from the East Room of the White House, alongside first lady Melania Trump, Vice President Mike Pence, and the second lady Karen Pence, thanked his supporters and touted “record” turnout.