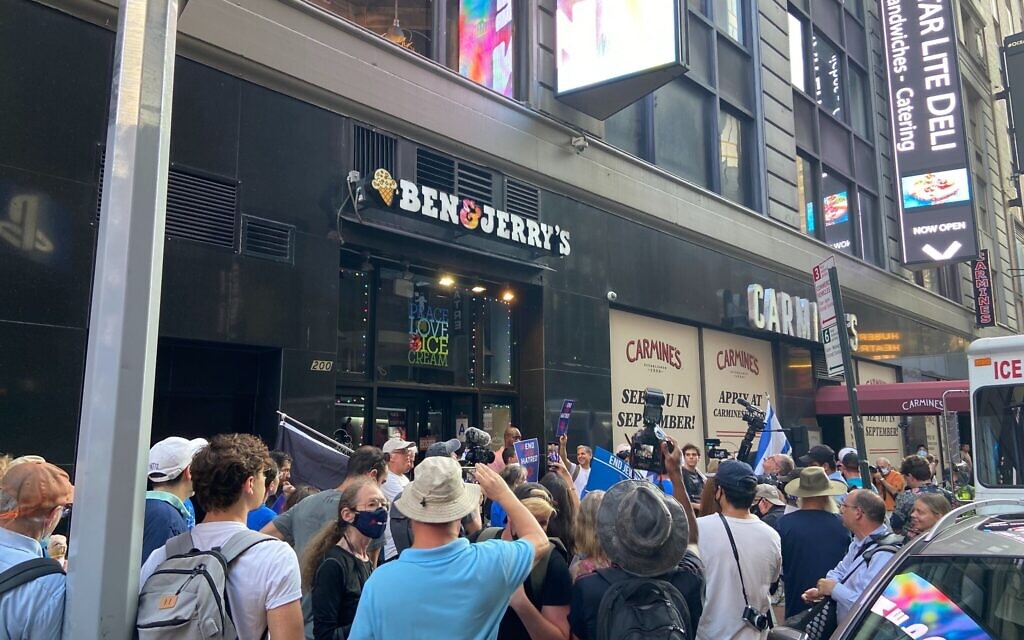 On Thursday evening, dozens of pro-Israel supporters gathered to protest Ben & Jerry’s anti-Israel stance, at one of its Manhattan locations.

Protesting the ice cream firm’s decision to cease its sales in West Bank settlements, demonstrators gathered in front of New York Public Library where several parked ice cream trucks awaited them, offering a free soft-serve as a direct revolt to the world-renowned ice-cream maker. The ice-cream vehicles were decked with signs that read “End Jew-hatred. Say no to Ben & Jerry’s,” alongside a photoshopped picture of a “DivestMint” flavored pint with a red X over it.

“One day it’s a boycott of Jews in Judea, the next day it’s an angry mob shouting intifada in Brooklyn,” shouted Benyowitz during the opening of the event. After the speeches, the participants sang the Israeli and American national anthems and began marching to the Times Square branch of Ben & Jerry’s a half-mile away. As they walked, Benyowitz led chants of “Shame on you, Ben & Jerry’s,” “Everyone deserves ice cream” and “From the river to the sea, Israel will always be.” By the time the protesters reached the Ben & Jerry’s shop, it had closed for the day, but demonstrators gathered at the entrance and continued chanting slogans against the company, demanding justice for Israel.