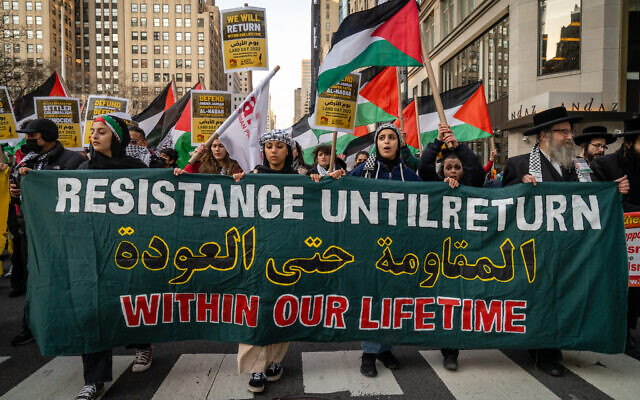 Taking over New York City to march for their cause, on Wednesday, a swathe of pro-Palestine protesters raged against Israel-linked organizations, despite the ongoing wave of Islamic terror attacks in the middle-Eastern nation. The demonstrators called for taking action against the pro-Israel organizations in New York, including removing their status as nonprofits.

On the occasion of “Land Day,” an annual Palestinian protest event, protesters flooded the streets of the Big Apple, demanding to vouch for “Intifada until victory”. The demonstrators gathered outside Grand Central Station in Manhattan, while a small group of pro-Israel counter-protesters assembled across the street, bearing Israeli flags and signs with the images of the 11 Israelis killed in terror attacks in the past week.

The pro-Palestinian group then marched through midtown Manhattan, stopping at the offices of Israel-linked groups including Friends of the IDF, the Central Fund of Israel, and Ateret Cohanim. They carried anti-Israel signs that read, “Intifada until victory,” “We will free Palestine within our lifetime” and “Resistance until return.”

The protesters chanted, “From the river to the sea, Palestine will be free,” “Resistance is justified when people are colonized,” “New York to Gaza, globalize the intifada” and “There is only one solution — intifada revolution.”

In order to prevent any violence, a line of police separated the two groups as they shouted at each other across 42nd Street.